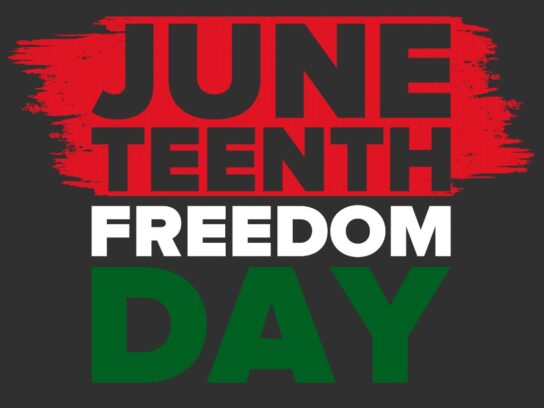 Montgomery County is holding an all-day Juneteenth Celebration Saturday at BlackRock Center for the Arts in Germantown.

This year’s theme is Freedom at the Rock…Acknowledge, Educate, Celebrate. The event runs from 10 a.m. to 10 p.m. at the arts center at 12901 Town Commons Drive. The county’s 24th Juneteenth Celebration includes art, dance, music and an awards ceremony. The family-oriented event also features educational activities and food trucks. 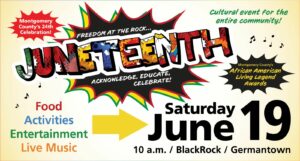 The federal holiday traces the African American struggle for freedom and commemorates the 156th anniversary of the day in 1865 when General Gordon Granger and 2,000 federal troops went to Galveston, Texas to take possession of the state to enforce the emancipation of its enslaved persons.

“The end of slavery not only meant freedom for a people, it meant freedom for a nation, however, nothing is guaranteed; as we see efforts at voter suppression nationwide, confrontation with law enforcement and excessive force issues for black and brown people, social justice crisis and an attempted insurrection and end of our democracy,” said Office of Human Rights Director James Stowe.

The award recipients are:

Dr. Elwood Rafael Gray is a pastor, instructor, author and consultant, Gray is the founder and president of the National Coalition of Prison Ministries. He is the pastor at Peace in the Valley Baptist Church in Silver Spring, an instructor and alumni at Howard University School of Divinity and editor of “The Messenger,” a newsletter published by the National Coalition of Prison Ministries.

Reverend Dr. Sterling King Jr. is a community activist, faith leader and global citizen, King attended the Howard University School of Divinity. After 34 years of service, he retired from Howard in 2010 as a tenured associate professor. He also served 28 years as pastor of the Macedonia Baptist Church in Bethesda. He was  past president of the Black Ministers’ Conference of Montgomery County.

Mackey King worked as a contractor for the U.S. Office of Compliance for Capitol Hill and also worked at the Employment Opportunity Commission in 1997. She is a member of the Montgomery Hills Baptist Church in Silver Spring, Board of Deacons, and teacher with the AGAPE Sunday School class.

He works with Aunt Hattie’s Place, which improves the quality of life for foster children. He has made significant financial contributions to the Universities at Shady Grove, home of the John & Effie Macklin Center for Academic Success, as well as to the Music Center at Strathmore.

Dr. Hercules Pinkney is board chair and member of the board of directors of regional health care system, Holy Cross Health. He has a background in business development, nonprofit organizations, government, instructional design, fundraising and management. He previously served as Chief Executive Officer of Montgomery College. In 2015, the college renamed the business park on the Germantown Campus the Hercules Pinkney Life Sciences Park.

He is a volunteer and coordinator of church volunteers at the “Let’s Pray” weekly program series on Hope TV.

Juneteenth is officially a federal holiday. 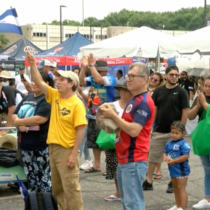