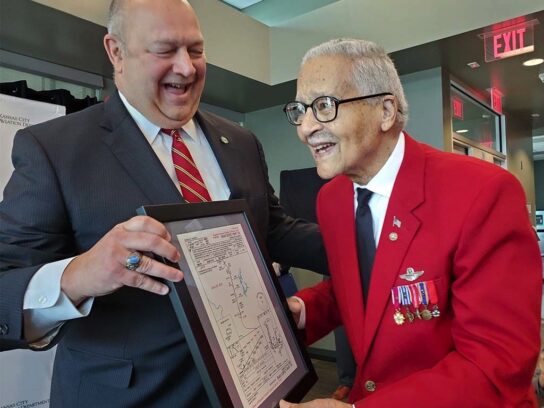 The general aviation terminal at the downtown airport in Kansas City, Mo., now bears the name of Brigadier General Charles McGee of Bethesda, a member of the Tuskegee Airmen and a Bronze Star recipient.

McGee, 101, served with the U.S. Air Force and was part of the 332nd Fighter Group and the 477th Bombardment Group. He was the airport’s manager during the early 1980s.

Attending the ceremony in which a plaque was hung with a description of his distinguished career, were some of McGee’s family members and two of Pres. Dwight D. Eisenhower’s grandchildren.

Prior to the ceremony, McGee said he was “honored beyond words,” adding that Kansas City “holds a special place in my heart…it’s where Frances [his wife] and I decided to make our home after I retired from the Air Force.”

McGee flew 409 combat missions during World War II, the Korean conflict and Vietnam. He served in leadership positions and was the first African American to command a stateside Air Force Wing and Base.