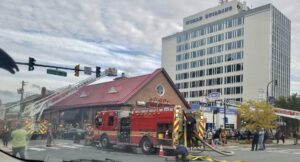 No injuries were reported after a fire around 4 p.m. Thursday at The Fire Station 1 Restaurant & Bar in downtown Silver Spring.

As of 5 p.m. the fire was under control and as of 5:31 p.m. some lanes in the area are still blocked, Montgomery County Fire and Rescue Service (MCFRS) Chief Spokesperson Pete Piringer wrote on Twitter.

He said the fire was in and around the hood/exhaust system of the restaurant at 8131 Georgia Ave.