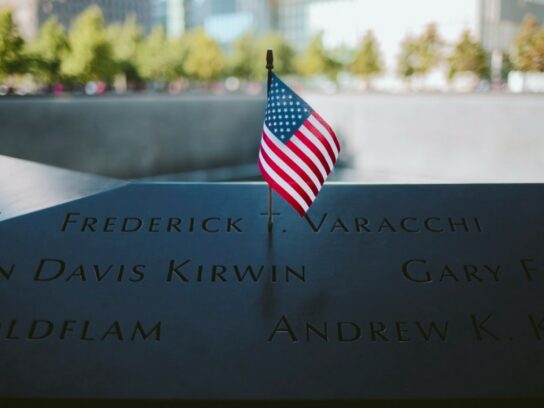 Montgomery County and state leaders took to Twitter Friday to mourn the Sept. 11, 2001 terrorist attacks against the United States.

Friday marks 19 years since the tragedy. Gov. Larry Hogan and Lt. Gov. Boyd Rutherford visited the Maryland Fire-Rescue Services Memorial in Annapolis to honor those who were killed.

This morning, Lt. Governor @BoydKRutherford and I laid wreaths at the Maryland Fire-Rescue Services Memorial in honor of the nearly 3,000 men, women, and children—including 68 Marylanders—who lost their lives in the horrific terror attacks that took place 19 years ago today. pic.twitter.com/92nWZzLbvT

It’s been 19 years since the terror attack on September 11. We remember the nearly 3,000 victims, including 11 from @MontgomeryCoMD. We remember the bravery of those who heroically fought against their attackers and the courage of the first responders. #NeverForget911 pic.twitter.com/klSkh9tuSW

The Montgomery County Council commemorated victims of 9/11, including 11 county residents. Councilmembers offered their own words of remembrance.

Today we honor the memory of the 3,000 lives lost on Sept. 11, 2001 & remain forever grateful to the first responders who sacrificed so much to save so many. We are especially thinking of the 11 Montgomery County residents who were killed that day & their families. #NeverForget pic.twitter.com/ETL5tmXeaS

This 19th anniversary of one of our nation's darkest days, #weremember the 2977 lives lost and #neverforget the sacrifices made to save thousands more. Let us summon that same sense of national unity as communities and one country to respond to our current crisis. #Remembering911 pic.twitter.com/OfL67qszML

Today we honor the memory of the 3,000 lives lost 19 years ago on Sept. 11. We are forever grateful for the first responders who saved so many & sacrificed so much. We are thinking of the 11 Montgomery County residents who were killed that day & their families. pic.twitter.com/5dGqVs1I7d

Today, we remember those who fell on September 11, 2001 to keep our country, America standing. As we remember in the midst of a pandemic that tests everything we stand for, may we continue to be resilient and brave. May we be blessed with leaders who will keep our America safe.❤️ pic.twitter.com/eVz05gu8W3

On September 11, 2001, we saw the worst of humanity and the best. Americans responded to the terror attacks by uniting, and first responders heroically ran toward danger to help others. In these challenging times, let us summon that same American spirit—one nation, indivisible. pic.twitter.com/qSZAVU5wzn

Today we remember the nearly 3000 lives lost in the 9/11 terrorist attacks 19 years ago.

We remember the first responders who ran toward danger to help others &save lives.

We remember the heroism, bravery & resiliency on the day that changed our nation forever. #NeverForget

As we commemorate #September11 again, I am sharing this haunting song by @emmasrevolution (performers at my first @unnaugural concert). Please take a listen as we grieve those who were murdered that day.https://t.co/H7oRfoeQgk

We remember all who lost their lives on 9/11 & continue to honor our first responders, EMTs & firefighters who serve on the frontlines. Proud to feature Andy Levy of @MFRI_UMD & Megan O'Brien of @BCCRS as this week’s #MD08 Local Heroes for their brave public service. pic.twitter.com/GJP8n6XA2g

Montgomery County Fire and Rescue Service (MCFRS) Chief Spokesperson Pete Piringer tweeted photos of a 9/11 memorial off of Connecticut Avenue in Kensington. The Kensington Volunteer Fire Department (KVFD) was one of the fire departments to respond to the terrorist attacks on the Pentagon.