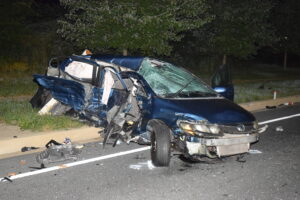 A Silver Spring man was found guilty late Thursday night for his role in a 2019 multiple-vehicle fatal racing collision, according to a release from the Montgomery County State’s Attorney’s Office (MCSAO).

A jury found Noe Daniel Suriel, 29, guilty of Driving a Motor Vehicle in a Race or Speed Contest and Gross Negligent Manslaughter by Motor Vehicle, per the MCSAO, for the death of Rene Antonio Hernandez Jr., 32, of Olney.

Suriel faces a maximum of 10 years in prison. A sentencing hearing is set for Aug. 19.

The fatal crash occurred along Georgia Avenue at an Intercounty Connector (ICC) entrance ramp on Sept. 6, 2019.

According to the release, the victim, Hernandez, was driving south on Georgia Avenue in a Honda Civic (pictured) and was trying to make a left turn onto the eastbound ICC entrance ramp when the collision occurred.

Three drivers, including Suriel, were driving north on Georgia Avenue. Suriel was driving a Dodge Challenger and swerved in front of Hernandez making glancing contact between the rear part of the Challenger and Civic’s front bumper.

Another driver, Camilo Jose Ahumada Serje, 27, of Olney, was in an Infiniti Q50S and struck Hernandez, spun off and was struck by another driver, Regino Andres Gonzalez Pena, 38, of Gaithersburg, who was in a Ford Explorer.

Hernandez was pronounced dead at the scene.

In Oct. 2021, Serje pleaded guilty to Gross Negligent Manslaughter by Motor Vehicle and faces up to 10 years in prison.

In May, Pena pleaded guilty to Gross Negligent Manslaughter by Motor Vehicle and faces an agreed-upon maximum sentence of 18 months.

According to the office, numerous witnesses told investigators that Suriel and Serje were driving at a very high speed before the crash and were “obviously racing.” They told investigators the drivers were weaving through traffic to pass other cars, revving their engines at red lights and accelerating heavily after lights.

An investigator found that Serje was driving at 106 mph five seconds before striking Hernandez.

Montgomery County State’s Attorney John McCarthy said, “This should send a message to anyone who would consider the highly dangerous and potentially deadly act of drag racing at excessive speeds. Any driver participating in a race may be convicted of manslaughter by motor vehicle regardless of which vehicle is involved in a fatal collision. I thank Assistant State’s Attorney Kyle O’Grady for his tireless work in prosecuting this case and express deep condolences to the family of the victim, Rene Hernandez Jr.”