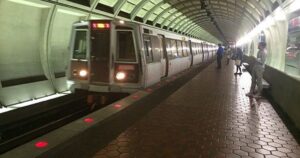 A man was struck by a Metro train and injured Tuesday night in Wheaton.

Authorities received a report of a person struck by a train at the Wheaton Metro Station around 11:20 p.m., per a Metro spokesperson. Montgomery County Fire and Rescue Service (MCFRS) responded and rescued him from the tracks. He was taken to a hospital “conscious and alert and is in critical but stable condition.” Station cameras show the man “walking off-balance, stumbling and then falling onto the tracks” as the train pulled in.