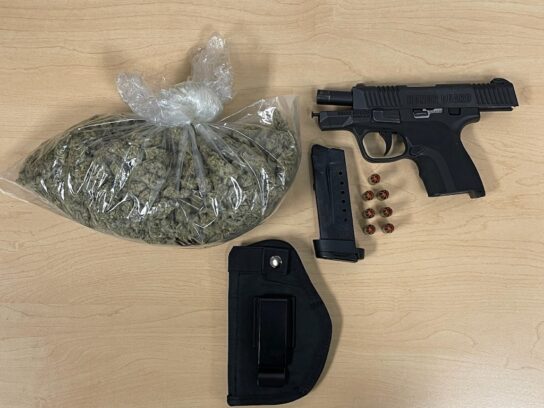 A Reston, Va. man was arrested and charged with illegally possessing a 9 mm handgun that was loaded with seven hollow-point, radically-invasive projectile rounds.

Tensai Berha Newold Gebremariam, 26, also was charged with possessing marijuana and an undisclosed amount of cash.

On Dec. 18 at 8:53 p.m., Montgomery County Police saw a black Cadillac with a Virginia temporary registration traveling north on Georgia Avenue and Sligo Avenue. Officers stopped the vehicle when the driver went through a red light, they said.

According to police, the marijuana, a marijuana grinder and an empty handgun holster could be seen in plain view. When the officers had Gebremariam exit his car, he told them there was a loaded handgun in the car. Police found it in a backpack behind the passenger seat.

Another backpack containing about a half-pound of marijuana, a digital scale and cash also were found in the vehicle.

Gebremariam is being held without bound on multiple charges, including illegal possession of a firearm and possession of a controlled dangerous substance with intent to distribute.

His preliminary hearing is scheduled for Jan. 14 in Montgomery County District Court in Rockville.