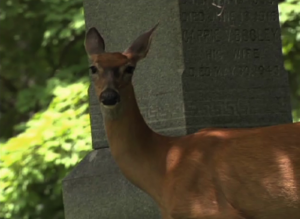 Montgomery Parks announced the start of its annual deer reduction program at 54 parks throughout the county. More than 50 percent of the parks’ total land area is involved.

The goal of the program, which runs from September until March 2021, is to reduce the deer population for public safety, protect natural resources and deal with county residents’ concerns, according to Montgomery Parks, which is part of The Maryland-National Capital Park and Planning Commission.

Because the county’s parks are rich in food and cover and a lack of predators, the favorable habitat results in an overabundance of deer, explained Ryan Butler, Montgomery Parks Wildlife Ecologist, in a news release.

All of the deer meat is used or donated. Meat from animals killed by police sharpshooters are donated to the Capital Area Food Bank. During this program, more than 337,000 pounds of deer meat have been donated to the food bank.

Prior to the start at any park, yellow signs are posted to let the public know when the program will begin and end. The management program will be conducted before sunrise or after sunset at some parks. At other ones, the parks will be closed for 24 hours during the hunt.

The program began 24 years ago due to deer-automobile accidents, damage to the environment and private landscapes and disease concerns. More than 20,600 deer have been removed from select parks since the inception of the program.

Send questions or comments on the program to the Parks Information & Customer Service Office by phone 301-495-2595 or email at Info@montgomeryparks.org.