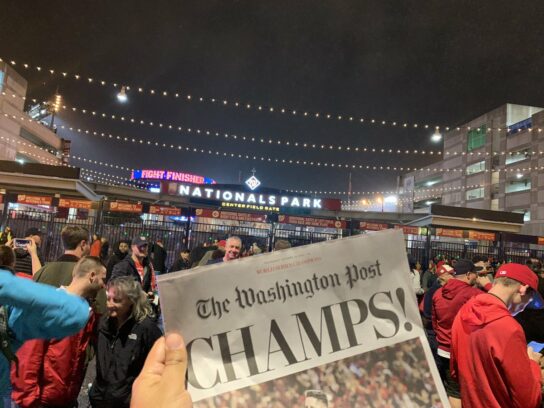 The Washington Nationals made history Wednesday night. For the first time in the franchise’s history, the Nats won the World Series beating the Houston Astros 6-2 in Game 7.

Fans can celebrate with the Nationals during a parade scheduled for Saturday, November 2, according to an announcement from Mayor Muriel Bowser’s office early Thursday morning.

Fans attending the parade may text “NATS” to 888-777 to receive text alerts on safety, transit, and weather updates from the District about the parade. Mayor Bowser is encouraging fans to take Metro or other public transit options as parking will be extremely limited near the route.

More information may be found on sportscapital.dc.gov as it becomes available.

The parade is free and open to all members of the public.

2019 @Nationals Championship Parade in the #SportsCapital: