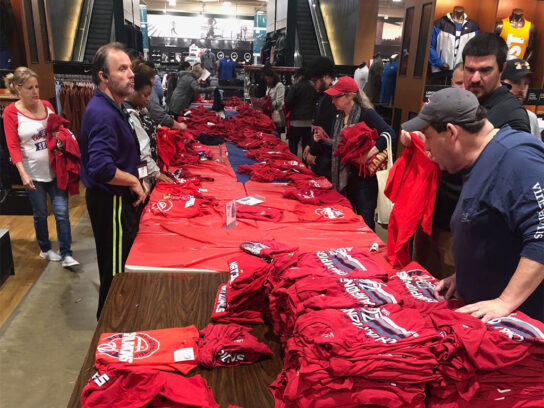 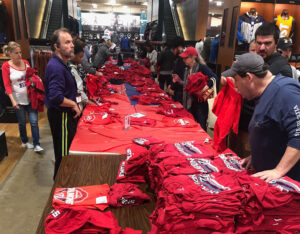 Ten minutes before the clock struck midnight Wednesday, the Washington Nationals clinched the franchise’s first ever championship beating the Houston Astros 6-2 in Game 7 of the World Series.

About 40 minutes later—at 12:30 a.m.—Dick’s Sporting Goods at Rio Shopping Center in Gaithersburg had opened its doors to customers hungry to buy merchandise saying “World Series Champions.” Lines that were amusement-park long, there was a local news crew doing live shots and the merchandise flew off the shelves. This was all happening at a time when most people are usually fast sleep.

History was made. In-person or online, we’re ready for you, Washington. #STAYINTHEFIGHT pic.twitter.com/kJCVci1gHy

Dick’s closed at 3 am then re-opened at 7 a.m. on Thursday to more frenzied crowds looking to gobble up what merchandise remained. By 9 a.m.—the normal store opening time—the majority of the merchandise, especially shirts, hats and hoodies, was gone but still some remnants remained.

If you’re hoping to get Nats’s World Series champs merch at Dick’s at Rio, better hurry. They are running out of everything. They wete open from 12:30am-3 am. Really. And re-opened at 7 am today.⁦@mymcmedia⁩ pic.twitter.com/PngkfFis95