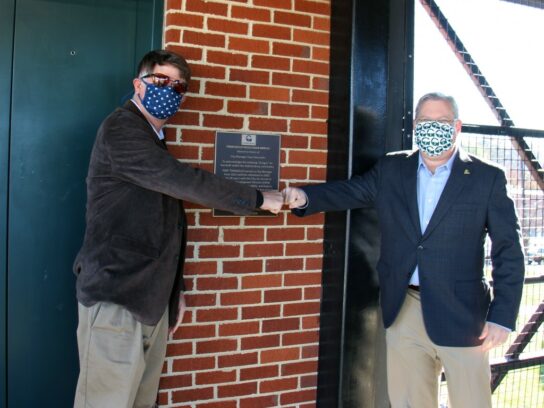 It was named after Tony Tomasello, who served as Gaithersburg city manager from 2012 until his retirement in 2020, the press release read. During his 24-year tenure with the city, he also served as economic development director, assistant city manager and deputy city manager.

There was a brief ceremony at the bridge for the official dedication made by Gaithersburg Mayor Jud Ashman and members of the City Council, according to the press release. Tomasello was also in attendance joined by members of the city’s senior leadership team. The crowd size was limited due to current gathering restrictions.

#ICYMI The bridge in Olde Towne has a new name! The "Tomasello Pedestrian Bridge" was dedicated to former City Manager Tony Tomasello recognizing his fostering of connectivity in Olde Towne & creating "bridges" of all kinds throughout the community. https://t.co/nxd8DQkJhB pic.twitter.com/sEhktnrHbn

The bridge project began in 1999 and was completed in 2001. The construction of the bridge and the parking garage involved significant collaborations with CSX, Olde Towne businesses, county and state legislators, and local residents.

According to the press release, at the dedication Mayor Ashman noted that it was fitting that the structure be named in Tomasello’s honor as he played an important role not only in its construction but in creating “bridges” of all kinds throughout the community during his time with the city.

“Tony fostered connectivity in Olde Towne through his tireless efforts to get this project built,” said Mayor Jud Ashman according to the press release. “But more than that, as we say on the plaque, he played an important role in Gaithersburg’s significant residential and commercial growth, balanced by a commitment to economic and social equity. We are delighted that his legacy is now partially ‘cast in stone.’”

Because of the frequent train traffic that runs through Olde Towne, the Tomasello Pedestrian Bridge serves as an important connection between the Olde Towne Parking Garage and the commercial center of Olde Towne Gaithersburg. The bridge is especially used by commuters who park in the garage and use the MARC train to access Washington, D.C. and points west, the press release read.