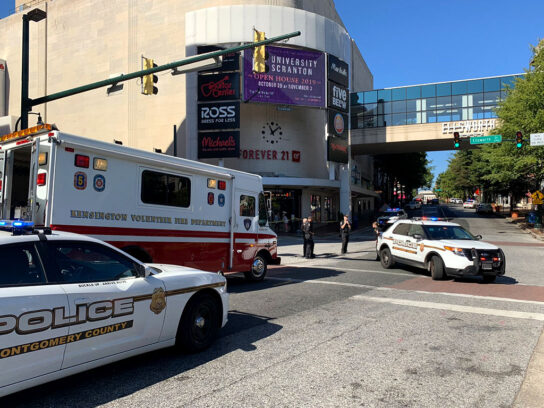 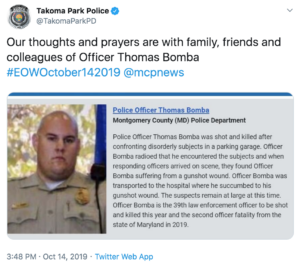 A Montgomery County police statement released Monday night says that someone told Officer Thomas J. Bomba of the disorderly subjects in the parking garage where he was killed.

In earlier statements, police said Bomba was conducting “proactive policing” and went to the top floor of the garage — at Fenton Street and Ellsworth Drive — on his own.

Bomba, 38, was found shot on the top level of the garage prompting a manhunt throughout Silver Spring.

The first assisting officer located Officer Bomba on the top level of the garage suffering from a  gunshot wound and immediately radioed for additional support to include Montgomery County Fire & Rescue Services.

Officers attempted lifesaving measures on the scene and Officer Bomba was subsequently transported to the MedStar Washington Hospital Center in Washington, D.C., where he succumbed to his injuries.

Police said the shooting remains an active investigation. Detectives urge anyone with information to contact the Major Crimes Division at 240-773-5070.  To be eligible for a reward, tipsters may call Crime Solvers of Montgomery County toll-free at 1-866-411-TIPS (8477) or enter a tip online. Crime Solvers will pay a cash reward of up to $10,000 for information provided to them that leads to an arrest.  Tipsters may remain anonymous.