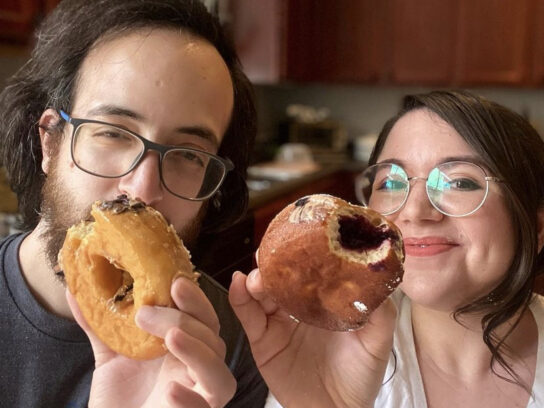 Maria and Dan started the Instagram account @doughnut_days in 2020 as a way to document their sweet adventures when they traveled out of Raleigh, North Carolina. However, as the quarantine boredom got the best of Maria in March of 2021, Maria, who asked MyMCM to not publish her last name for privacy reasons, realized she could recreate their donut-filled adventures a little closer to home

“It was a generally safe thing to do during the pandemic and it’s not expensive either. So it’s a really inexpensive way to spend time and a safe way to do so as well. So, we started going to donut places locally, and then I started mapping it because I love data,” Maria told MyMCM.

The shared love of donuts brought Maria and Dan together and reminded Maria, who is originally from Argentina, of her native country’s custom of having a fourth meal of the day consisting of coffee and a pastry.

“Every culture has a sweet part of a shared experience. A donut is basically the equivalent of that but in American form. This is the American equivalent of me having some Argentinian experiences, she said. “I started this project because our love for donuts was exceeded by a few other things. We started going on these adventures as a part of our dating experience, and eventually we started to see if we could have some weird experiences and also enjoy donuts at the same time.”

Maria used the social media platform Reddit to get feedback on the first draft of her donut map. While the map first had the filters “donuts” and “donut-y things” to sort the places she found, it soon grew to include “cake-baked,” “irregular,” and vegan and gluten-free donuts as engagement increased. Maria also decided to expand her map to include the D.C. area and Montgomery County, where Dan grew up.

“The Raleigh [donut] map got such good reception that I started to see if Washington D.C., Montgomery County, and just anywhere else in the DMV area that had a subreddit would be interested in seeing [the maps] and contributing feedback,” she said. “If they see something, they’ll send me a message on Reddit or on Instagram and then I can add that to the map. So it’s really nice in terms of community collaboration.”

According to Maria, people were so excited about her donut map for D.C. and the surrounding areas, including Montgomery County, that it crashed the first time she posted it to Reddit.

“They crashed it…and then I checked and there was something like 15,000 views on my maps. Eventually, it started working again, but I created a second version off of their suggestions, and I just edited one recently this past week to add in all the new filters, new places, and all the places that are gone,” she said.

As of Nov. 19, there are 154 shops that sell donut or donut-like treats mapped within 40 miles of Rockville, MD. The D.C. Metro Area Map includes shops all across Montgomery County, including in Bethesda, Potomac, Germantown, Olney, and Silver Spring.

“The maps are created to show you where you can get a donut or donut-like thing. So, when you look at it, I go through and I create little write-ups about each place based off of the information that I find online. And then I share that and…I’ll usually post about places I really, really enjoy [on Instagram].”

Maria and Dan’s “Doughnut Days” includes their Instagram account, a website with donut maps for Raleigh and D.C., as well as a blog where they post about unique or enjoyable experiences while on their donut adventures. One blog post described their adventure to Aspin Hill Memorial Park in Silver Spring.

“We went to Sunday Morning Bakehouse, which is in Pike & Rose, we picked up some brioche doughnuts, and we met a couple of friends over at the Aspin Hill Memorial Gardens. I wrote up a blog post about how absolutely fascinating it is and how amazing it is to see their headstones that are from 1902 for these little creatures…You’re sad these animals are gone, but you really feel how much these people love them enough to build the space for them,” she said.

The donut maps do not attempt to convince people to visit certain donut shops, Maria says, but rather be a neutral source of all donut information for donut-lovers like herself and Dan.

“These maps have basically every possible donut place, every place you can get a donut, is what I’m trying to accomplish, within reason, [and] pushing for local makers specifically…What I like isn’t necessarily what other people like, and I have found that across the board.”

Maria’s advice to anyone looking to step up their donut game is to keep your mind open and try everything.

“Just go with an open mind. Try, look, see what strikes your interest, and just keep trying. We haven’t even gone through the entire map, we are constantly trying new things. Sometimes a misadventure is still an adventure.”