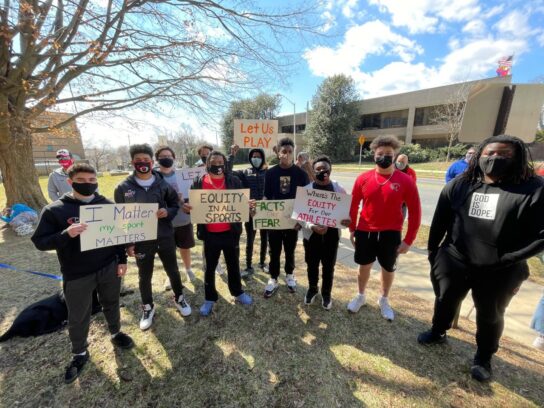 Over 100 high school football players, poms participants, their coaches and parents chanted,”Let us play,” Sunday in protest of Montgomery County’s disallowing contact football games due to the pandemic. Gathered in front of the county council building in Rockville, they questioned why soccer and indoor hockey are permitted, but not football.

Harrison Loudermilk, a senior at Bethesda-Chevy Chase High School, admitted to being “pretty upset.” Many students are just sitting home, and he was so looking forward to football, with his mask on and drinking from his own water bottle, he said.

The students have been practicing and started wearing pads and helmets as of last week, only to learn on March 12 that County Executive Marc Elrich and members of the county council loosened quarantine restrictions at bars and restaurants but not for high school football. Football now is considered a high risk sport and only can be played when full protective equipment is not worn, and there is no contact between players.

Football brought “a sense of normalcy” into the pandemic life of Walter Johnson senior David Gardner. Pointing to his teammates, Gardner said, “These guys are family for me. It sucks that I won’t be able to play with them anymore.”

Fellow teammate Daniel Ticktin agreed. “It’s my senior season. They gave us a little bit of hope” by approving practice. “We have all the precautions in place.” He called the cancelling the season “devastating,” saying it didn’t make sense “to pull the plug on football at the same time they allow hockey and soccer.”

King Tshiama, an 11th grader at Quince Orchard High School, has been playing football for eight years. “Football is very important to me. I believe it can take me to a lot of places,” he said, adding, “If we follow the rules, then we should be allowed to play.”

Ben Minturn, B-CC head football coach, said he was frustrated that this decision came down suddenly, He said the council’s decision was “like dangling a carrot” in front of the students by letting them practice with pads and then calling off the season a few days later.

Many at the rally called it an equity issue, noting that football players aren’t listened to the way other athletes are. “Probably 15 kids on my team didn’t come today because they are working. It is unfair,” said Gardner.

His father, Steve Gardner called the decision to end the football season before it began “completely arbitrary and unfair.” Besides David, his other son, who is a junior at Walter Johnson, hopes to play college in football, but no one will recruit him if he “has no film,” Steve Gardner. 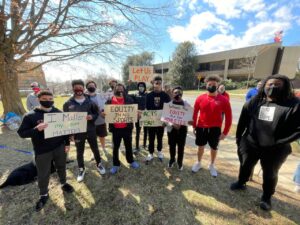 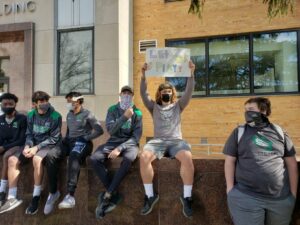 It wasn’t just football players who were upset. The poms, who already had agreed not to do their kick routines, now won’t be able to do the only thing left to them – perform at football games.

Tanya Ang, a coach for the Walter Johnson squad who has a son who plays football at Montgomery Blair, said parents understand all activities involve a calculated risk, but “parents should be the ones who make the decisions.” Ang said that for some of the students, “this is the only chance they have to get a scholarship so they can go to college.”

Also attending the rally was Lavanya Sithanandam, a pediatrician and Montgomery County Public School parent. “I am here to support these kids.” Football is played outdoors, and there is minimal COVID-19 transmission on the field. She said since the pandemic began, there has been a rise in childhood obesity and mental health issues. She believes sports will help ease both problems.

So practice in shells for the rest of the season?

That’s not football. RT IF YOU AGREE!!

@EarlStoddard Dr. Stoddard can you explain to the thousands of families who have a HS football student-athletes here MoCo why you decided to pull the plug on “contact” at the last min affectively putting the season , which is currently underway, at risk of not being played ? 1/6