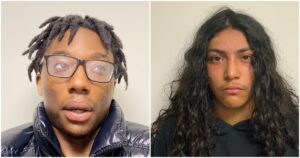 Two suspects are charged with murder after a 19-year-old was fatally shot in the Cloverly area, according to the Montgomery County Police Department (MCPD).

At about 3:40 p.m. Tuesday, officers responded to the 1000 block of Good Hope Drive for a reported shooting, per a press release. They found Jahiem Rayquan Pinnock, 19, of Silver Spring, in the parking lot with an apparent gunshot wound. Officers and fire rescue personnel administered aid to Pinnock before he was taken to a hospital, where he was pronounced dead.

A lookout was placed for the suspected car involved with the crime, police said, which was a green Toyota sedan. An officer saw it and the driver sped off as police tried to make a felony stop. The driver eventually crossed a center median, which caused damage to a tire. The car came to a stop on Powder Mill Road.

This is an active investigation. Police ask anyone with information to call the Major Crimes Division at 240-773-5070 or contact Crime Solvers of Montgomery County at 1-866-411-TIPS (8477).  Callers can be anonymous.