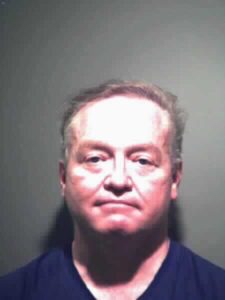 Dr. James Ryan, 49, of Clarksburg, was arrested Tuesday morning at his dental practice on Observation Drive in Germantown. Via Montgomery County Police.

An oral surgeon in Montgomery County is charged with second-degree murder after police said he provided substances to his girlfriend who fatally overdosed in January.

Dr. James Ryan, 49, of Clarksburg, was arrested Tuesday morning at his dental practice on Observation Drive in Germantown, according to a release from the Montgomery County Police Department (MCPD). He is charged with the murder of 25-year-old Sarah Harris, who was Ryan’s former patient and began working at his practice in Oct. 2020 as a surgical technician. The two began dating around Jan. 2021 while Harris worked at the practice, police said, and they lived at Ryan’s home.

On Jan. 26, officers responded to the 13900 block of Godwit Street in Clarksburg for the overdose. Montgomery County Fire and Rescue Service also responded and tried life-saving measures. Harris was pronounced dead at the scene.

Police said Ryan was giving her controlled substances including Propofol, Ketamine, Diasepam, and midazolam. During a press conference Tuesday, Police Chief Marcus Jones said various bottles of substances were found in the home, as well as numerous hypodermic needles, syringes and tourniquets.

“These bottles are not the type of medication that would normally be dispensed from a pharmacy and are usually reserved for clinical, medical settings,” Jones said. An autopsy revealed Harris’ cause of death was Ketamine and Diasepam intoxication, he said.

Investigators learned that family members noticed Harris’ physical appearance was changing and that “she did not look healthy,” Jones said.

Ryan was arrested after extensive investigation, police said, and is held in the Central Processing Unit without bond.

This is an active and ongoing investigation.

A Montgomery County Dentist has been arrested and faces multiple felony charges after being arrested at his dental practice.https://t.co/0DGmZisS79#MCPNews #MCPD pic.twitter.com/8Ixx6EhFjv