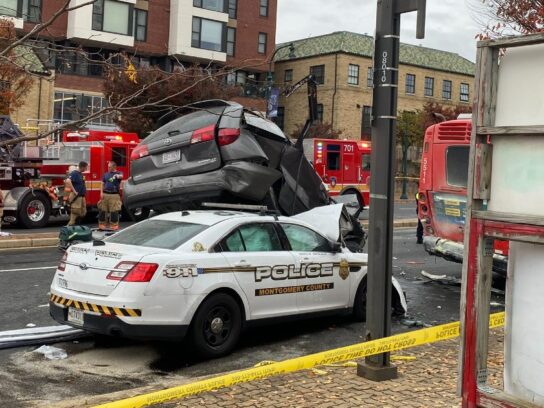 Two men from Washington, D.C. and one from Silver Spring were arrested Monday in connection with an armed robbery on Piney Branch Road that was followed by a police pursuit.

According to Montgomery County Police, at ab0ut 2:40 p.m. on Monday, officers responded to the 9300 block of Piney Branch Road for an armed robbery. The victim gave police a description of a vehicle that was suspected to be involved as a Toyota Sienna.

Two men were taken into custody at the scene, and Montgomery County Fire and Rescue staff extricated a third man from the vehicle. A loaded 9 mm ghost gun with a Glock slide and a 9 mm airsoft gun were recovered during the arrests.

They each were charged with armed robbery, use of a firearm during the commission of a felony violent crime, possession of a handgun and other charges. All three remain hospitalized on Tuesday.

No officers were injured, and there were no serious injuries to passengers on the Metro bus.

Happening now in Silver Spring, MD: This man is lucky to be alive pic.twitter.com/ctVJwRbidb