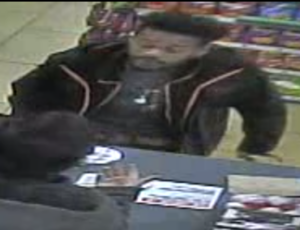 Police have released images of the suspect from the Jan. 13 assault that took place at the Germantown 7-Eleven.

At 11 p.m. on Jan. 13, the suspect entered the 7-Eleven, and became irate with the store clerk. The suspect then walked behind the counter and began to physically assault the clerk. The suspect produced a weapon and made threats towards the employee, the press release said.

While this was occurring, a woman walked behind the counter and led the suspect away from the clerk. The woman is being considered a person of interest, according to the press release.

The police surveillance video is below:

Detectives are asking anyone with information regarding the suspects to call the 5th District Investigative Section at 240-773-6237.  Those who wish to remain anonymous may call Crime Solvers of Montgomery County toll-free at 1-866-411-TIPS (8477). Crime Solvers will pay a cash reward of up to $10,000 for information provided to them that leads to an arrest in this case.