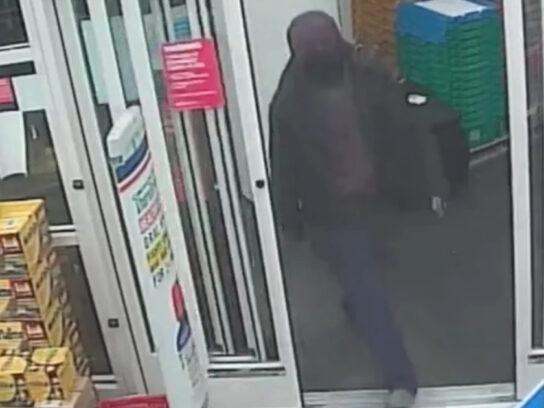 Detectives from Montgomery County Department of Police (MCPD) – Major Crimes Division are asking the public for help in identifying a man caught on surveillance video during an armed robbery of a CVS last week.

The incident occurred on Dec. 8 around 6:40 p.m. at the CVS Pharmacy located on the 11400 block of Rockville Pike in North Bethesda.

Detectives say the man in the surveillance video entered the CVS and lifted his shirt towards an employee implying he possessed a gun underneath. The suspect demanded the employee open the safe located inside the store’s office. After taking the money from the safe, the suspect fled the store on foot.

The suspect is described as a Black male, approximately 6-feet to 6-feet, 2-inches tall with a medium complexion and build. He was wearing a black coat, purple hooded sweatshirt, blue pants, gray sneakers and light-colored gloves.

Detectives urge anyone with information about the identity of the suspect to call the Major Crimes Division at 240-773-5070.