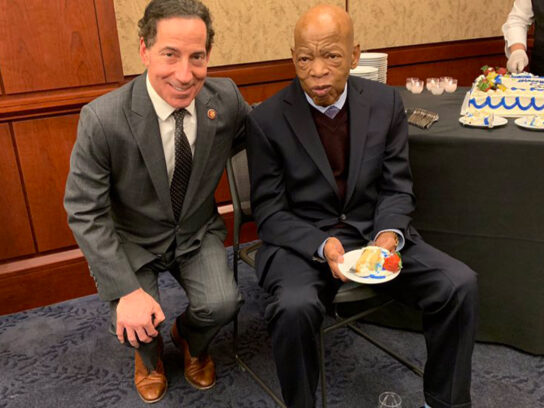 MyMCMedia spoke to Rep. Jamie Raskin (D-Md.) about the legacy of civil rights icon and former Rep. John Lewis (D-GA). Raskin said Lewis “never wavered for one minute in his beliefs in nonviolence.”

“His message was not one of revenge, it was not vindictive, it was about transformation and us being in an interracial process together to get America past the deranged magical thinking of racism,” Raskin said.

Lewis died July 17 after battling pancreatic cancer. His funeral was held Thursday in Atlanta and feautured tributes from former Presidents Bill Clinton, George W. Bush, and Barack Obama. The New York Times published an essay Lewis wrote before his death, which was published Thursday, the day he was laid to rest.

“In my life I have done all I can to demonstrate that the way of peace, the way of love and nonviolence is the more excellent way. Now it is your turn to let freedom ring,” Lewis said in the essay.