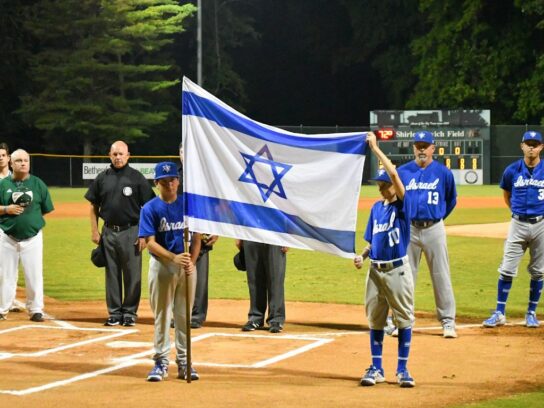 The Israel National Baseball team defeated Bethesda Big Train Sunday under the lights before a sold-out crowd at the Shirley Povich Field days before heading to the Olympics in Tokyo.

During a Friendship game that featured “Take Me Out to the Ballgame” sung in Yiddish and food trucks with Jewish treats from Attman’s Potomac Deli and Schmaltz Brothers, the two teams played a close seven-inning game that ended with the Israel National team winning 8-7.

“For Team Israel to come to the U.S. capital as part of our tour has special significance for the team, as Israel and the United States are strong allies and this cooperation manifests itself in all fields,” Team Israel General Manager Peter Kurz wrote.

“We are so honored to be able to host the Israel National Baseball Team,” Bruce Adams, founder and president of the Bethesda Community Base Ball Club wrote on the back of the commemorative ticket.

That was an incredibly exciting game. We were thrilled to be able to host Team Israel in their preparation for Tokyo. Roll Train ‼️🚂 @ILBaseball pic.twitter.com/iFmM5ozNJq

Spectacular night to watch a ballgame in front of a standing room only, sold out crowd at Shirley Povich Field to watch a friendly between @ILBaseball and @GoBigTrain.

What a special event for our community to host. 🇺🇸⚾️🇮🇱 https://t.co/cXPH1YCApP

Flags of #Israel and #USA flying before the @IlBaseball–@GoBigTrain game! 🇮🇱🇺🇸

Nothing like baseball to being people together! Glad to have a chance to see them play before #Tokyo2020 pic.twitter.com/oFZnQjg0FA

We had an awesome game last night – the Israel National Baseball Team (on their way to the #Olympics2021 ) vs. @GoBigTrain – in a absolutely gorgeous field thanks to the @MontgomeryParks team!! So proud!!! PS: Bruce Adams is AMAZING!!! pic.twitter.com/V199lZMpjk

Few people better to spend a night at a ballpark with! Congrats to Bruce Adams & the whole @GoBigTrain team for an amazing event w/ Team @Israel & @IsraelinUSA. https://t.co/SVA5NiAG0y