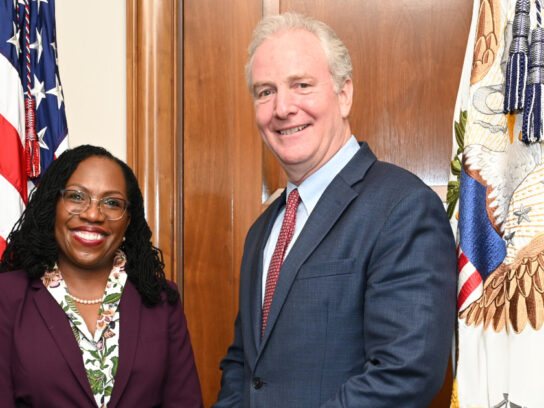 Ketanji Brown Jackson was confirmed on Thursday by the U.S. Senate as the newest Associate Justice of the Supreme Court by a vote of 53 to 47.

In his statement, Van Hollen wrote, “With today’s vote, both Judge Ketanji Brown Jackson and the United States Senate made history. I was proud to vote to make her ‘Justice Jackson’ and to participate in this historic moment in our democracy. Over the past few weeks – and throughout her career – Judge Jackson has proven how imminently qualified and prepared she is for this role. Like Marylander Thurgood Marshall before her, Judge Ketanji Brown Jackson is a trailblazer, and I know she will uphold the injunction emblazoned on the entrance to the Supreme Court: ‘Equal Justice Under Law.'”

Throughout her impeccable career, Judge Jackson’s brilliance, wisdom, & grace have shown through. She’s unshakeable. She’s inspiring. And soon, she will make history as the first Black woman to join the Supreme Court. This is a victory for America! #ConfirmKBJ pic.twitter.com/Jf3SbgAQcl