Plastic bottles, an orange peel, plastic bags, a plastic pumpkin, fast food soda cups and other trash were pulled out of a tributary of the Northwest Branch in Silver Spring, which leads to the Chesapeake Bay, in a pilot program designed to keep litter out of the water.

During a light rain, Montgomery County Conservation Corps members threw the garbage that had been captured by the litter trap on to a large gray sheet, where they separated it into such piles as food and drink, take out foam and wrappers. The members, who are between 17 and 24 years of age and working on their GEDs, then weigh the items and keep inventory of what ends up in the water. 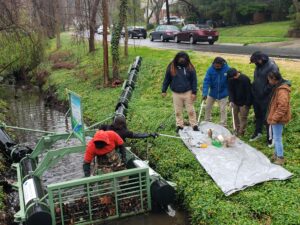 Plastic bottles make up 60% of the weight of the litter in the Anacostia watershed, according to Trey Sherard of the Anacostia RiverKeeper.

This is the first litter trap in the county and the eighth one in Washington, D.C. and Prince Georges County.

Chesapeake Bay Trust President Jana Davis, whose group helped obtain the $200,000 in grants used to build and maintain the litter trap, stressed the importance of removing plastics and other debris from area waterways. “Everyone who lives in our state lives one or two miles from a stream,” she said.

Executive Marc Elrich said he hoped more of these traps will be constructed throughout the county.

The City of Gaithersburg also wants to install litter traps along the Muddy Branch by I-270 and currently are seeking someone to do the work. The water there flows into the Potomac Watershed.

President/CEO of Storm Water Systems Gary Hopkins, whose company installed the pipes and trap,  hopes that with fewer bottles and other litter flowing into the Anacostia watershed, he will be out of a job one day. 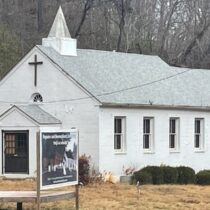 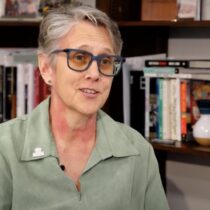