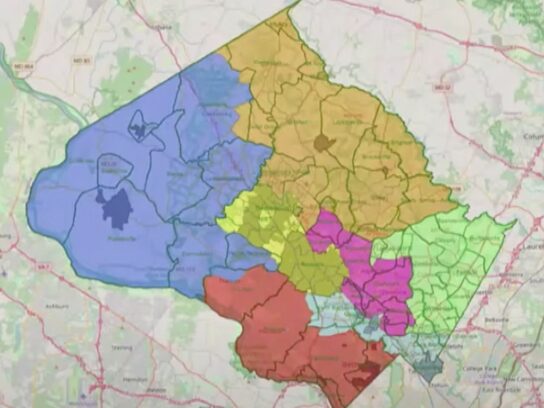 Throughout two public hearings on the proposed redistricting map changes, a common theme of please don’t separate my neighborhood rang out.

The Montgomery County Commission on Redistricting was tasked with dividing the county into seven districts. While redistricting is required every 10 years, this time many changes needed to be worked out after residents voted to expand the number of council districts from five to seven.

Each of the seven districts must contain about 150,000 residents. They have to be compact and contiguous, and ethnic and racial groups have to be distributed in such a way that they are not packed into one district or split up so much that their voices are diminished.

The biggest objections seem to come from North Bethesda residents, who would be grouped with Silver Spring and Takoma Park, rather than its current grouping with Bethesda and other Route 355 communities. That district is shaped like a bow tie, said several of the speakers during the two public hearings.

Other speakers were upset that the upcounty area was not properly redistricted to account for its size, and that the Kemp Mill area in Silver Spring was divided in such a way to separate the Orthodox Jewish community there from its nearby kosher restaurants, Jewish day schools and synagogues.

Becky Romero of North Bethesda said the Friends of White Flint is strongly opposed, noting it “goes against our identity.”

Added Kaushambi Shah of North Bethesda, “We are feeling marginalized.” The issues that North Bethesda cares about are more aligned with those of Bethesda and Rockville and not Silver Spring and Takoma Park, she said.

Russell Lacey, chair of the Greater Bethesda Chamber of Commerce, also is upset about North Bethesda’s location away from Route 355. “We wonder now if we will be referred to as North Silver Spring,” he said.

Ira Unger, who lives in Kemp Mill, said, “The commission made an error in dividing” the area’s largest Orthodox Jewish community along Arcola Road, leaving residents in one district and all services it uses in another. “The current district map is a clear error that will dilute the voice of our distinct community,” he said.

According to the proposed redistricting map:

District #3 includes the municipalities of Rockville and Gaithersburg and also Washington Grove and the area between the municipal boundaries.