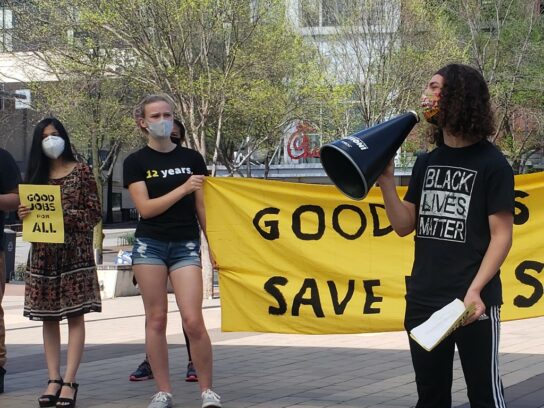 On Sunday, about two dozen young people with Sunrise Silver Spring, called on U.S. Sen. Ben Cardin to sign the Good Jobs for All pledge demanding that the government provide jobs that are green, well-paid and provide paid leave.

The pledge calls on federal politicians to “commit to doing everything in my power to pass legislation that guarantees good jobs for all, invests $10 trillion over the next decade to create millions of union jobs addressing the crises of climate change, economic inequity, and systemic racism, and puts money into the hands of people and communities, not the wealthy few.”

They also called on President Joe Biden and members of the U.S. Congress to sign the pledge, which U.S. Sen. Chris Van Hollen already has done.

Members of the youth-led climate and social justice movement gathered at Veterans Plaza in Silver Spring and chanted, “Hey, hey. Ho ho. Poverty wages have got to go,” and “You owe us jobs.”

Zoe Duni, a tenth grader at Walter Johnson High School, explained how frightened she had been when her father lost his job during the pandemic. “I felt powerless that there was nothing I could do,” she said, explaining she was not sure who would take care of her and her younger brothers. If  her father hadn’t lost his income, she would have been worrying about her school work, friends and getting into college, she said.

“Sen. Cardin, I am not the only one with these fears,” Duni said. 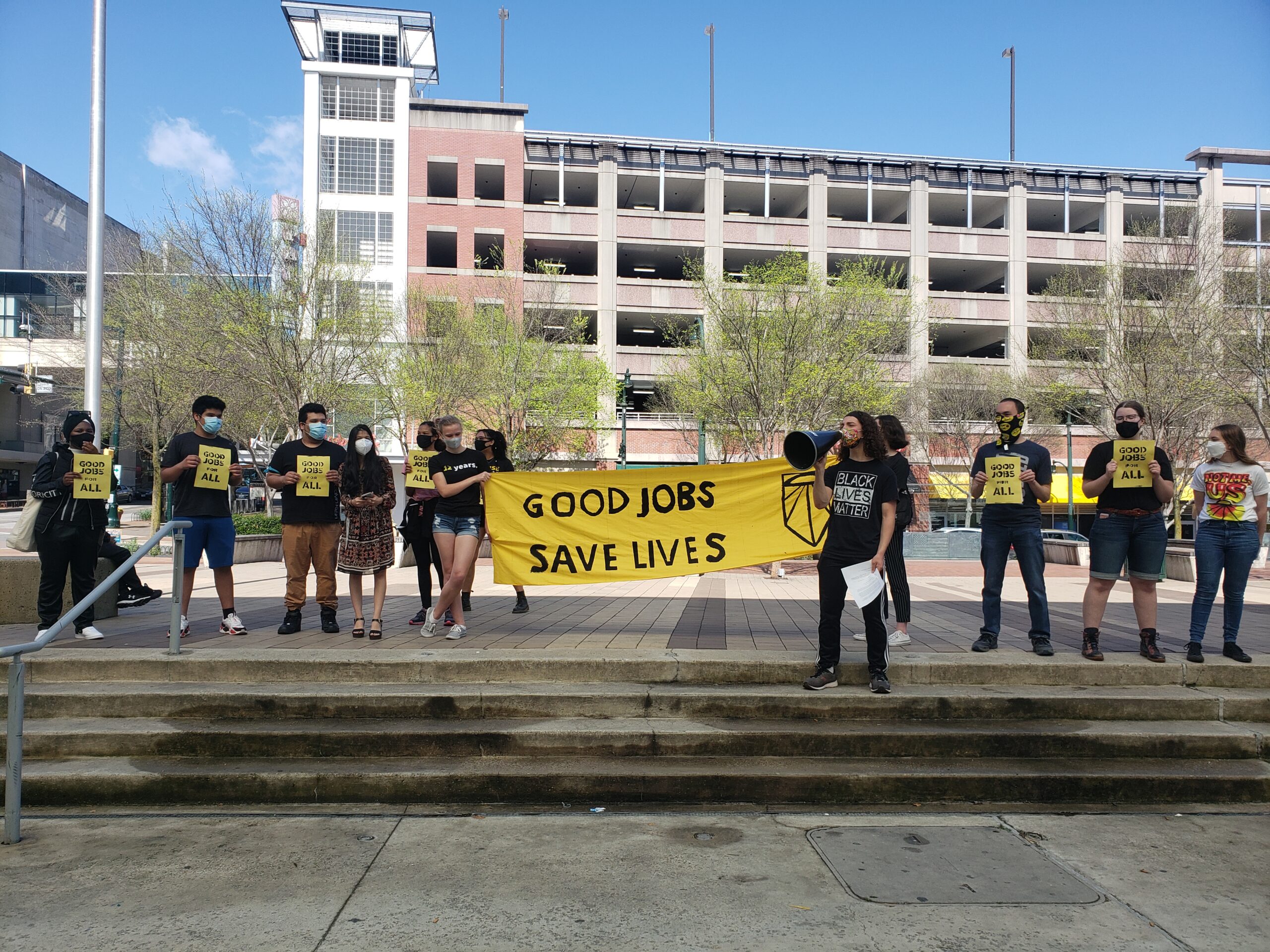 Abby Kusmin, a senior at Montgomery Blair High School, said the pandemic threw her life into a panic, especially when she didn’t get to be a camp counselor, which would have been her sixth and final year amongst the preschool-age campers. The camp did not operate during the summer of 2020 due to the pandemic.

“2020 was a hard year for me as it was for so many others. I struggled with depression,” she said. But it also helped her realize how much she wanted to be a preschool teacher, despite its poor pay.

“It’s not that I want to be rich,” Kusmin said, “but I also think about the harsh realities” of being able to pay her medical and other bills.

Gaithersburg Councilmember Laurie-Anne Sayles addressed the group, letting them know, “I’m on the front lines fighting our community every day. Jobs are the most important thing.”

Hanan Miles of Takoma Park emceed the program and urged young people in the audience to join, explaining that the Sunrise Movement also works for health care, police reform and the environment. They are striving to get student resource officers out of Montgomery County Public Schools.

We're rallying in Downtown Silver Spring at our good jobs action! Here are some pictures of our rally!

We are demanding that @senatorcardin sign the Good Jobs for All Pledge to guarantee good jobs to millions of Americans. pic.twitter.com/IXsnkL0oc0