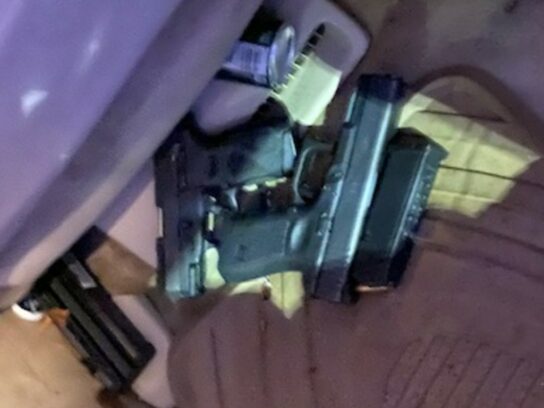 A Holiday Alcohol Task Force officer arrested three men who were charged with handgun related offenses, among other offenses, on Nov. 29, the Montgomery County Department of Police said in a press release posted Dec. 4.

Erick Cordova-Reyes, 25, of the 13500 block of Keating Street in Rockville; Cristian Ayala, 25, and Ricardo Ayala, 24, both of the 2600 block of Terrapin Road in Silver Spring, were charged with handgun-related offenses that include possession of a handgun by a prohibited person following a traffic stop in the Takoma Park area.

Cristian Ayala was charged with driving under the influence (DUI) and several other traffic offenses.

On Nov. 29 at approximately 1:55 a.m., a task force officer was on routine patrol when he observed a driver commit a traffic violation in the area of University Boulevard East and Merrimac Drive.

Police say the officer found that Cristian Ayala, the driver, had an expired Maryland learners permit, and he noted that Cristian Ayala had a strong odor of alcohol on his person and was exhibiting signs of being under the influence of alcohol. Other officers also observed several empty beer bottles, along with several unopened beer bottles, in the back seat of the vehicle. Cordova-Reyes sat in the front passenger seat and Ricardo Ayala was in a rear passenger seat.

During a search of the vehicle, officers located a half-empty bottle of alcohol in the car. Two handguns, one of which was loaded, were found under Cordova-Reyes’ seat.  A fully loaded magazine for the unloaded handgun was also located under his seat, according to the press release.

Officers then determined that Cristian and Ricardo Ayala are prohibited from owning a firearm due to prior criminal convictions.

The 25yr old driver of the car was additionally charged w/ DUI.