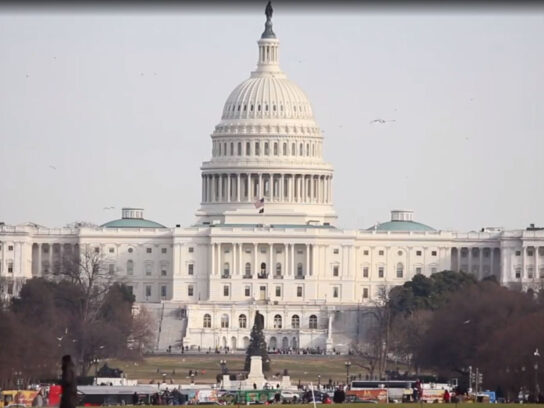 Three Eastern Middle School students won first place in this year’s StudentCam national video documentary competition open to students in grades 6-12 contest. Over 5,300 students participated in the competition which was organized by C-SPAN television network. Students were asked to create a 5-6 minute-long documentary that addressed the theme, “What’s Your Vision in 2020?” on the issue they wanted the presidential candidates to address. More than 2,500 documentaries were submitted to C-SPAN.

Marissa Boucher, Yuna Chun and Defne Ustundag, students at Eastern Middle School in Silver Spring, won first prize in the middle school division. They will share $3,000 for the documentary, “Blackout: Misinformation in the Age of Social Media.” This documentary will air on C-SPAN at 6:50 a.m. ET and throughout the day on April 17.

In addition to the grand prize and first prize winners, C-SPAN awarded 16 second prizes, 32 third prizes and 97 honorable mention prizes. These winning videos will receive cash awards of $1,500, $750 and $250, respectively.

Montgomery Blair High School seniors Lintaro Donovan and Young-Bin Lee won a second place prize in the high school east division for their “Democracy Must Be Learned: Civics Education and Youth Engagement” video. This documentary will air on C-SPAN at 6:50 a.m. ET and throughout the day on April 16. The two students will receive $1,500 as one of this year’s 2nd Prize winners

Roberto Middle School students Soumya Jailwala and Anna Srey produced and published a video titled “DACA: The Dreamers of America” It and three other submissions won second place for the middle school division.

C-SPAN awarded eight third prize winners for the middle school division. Three of the eight winners were from schools in Montgomery County. Their videos include:

During the month of April, C-SPAN will air all the winning videos.

The entire list of StudentCam prize winners, including 18 honorable mentions, may be viewed here.