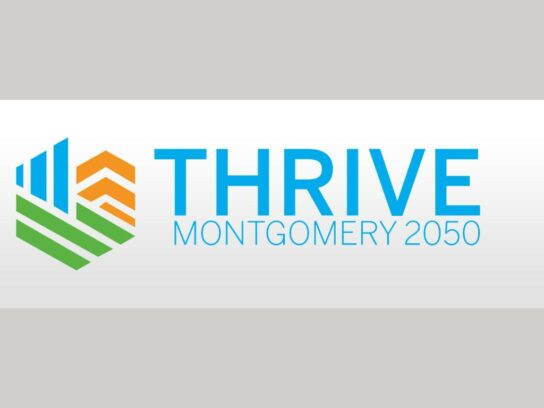 The Montgomery County Council hosts a virtual listening meeting on Tuesday, Nov. 30 at 7 p.m. to get feedback on Thrive Montgomery 2050, an amendment on the 1964 General Plan, last updated in 1993.

According to the Council, the listening session will accommodate both residents who are unfamiliar with the plan and those who “have been following the plan closely.” Community members who want to testify on the draft plan must preregister by Sunday, Nov. 28 at 5 p.m., or submit written feedback for the Council to consider.

Thrive Montgomery 2050 has garnered both positive and negative reactions from residents and outside news sources. Given the high community interest in the plan, all residents who preregister will be placed on a waitlist and contacted with a Zoom link once selected.

The county defines Thrive Montgomery 2050 as: “a framework to guide land use planning for housing, economic development, equity, transportation, environmental sustainability and more for the next three decades in Montgomery County.”

Additionally, the official website describes the updated policy plan as a way to resolve unintended consequences of the previous plan from almost 30 years ago. That according to the website, included an “inequitable investment between the eastern and western parts of the county, excessive reliance on automobiles, and zoning of more than one-third of the county exclusively for single-family homes.” The website also notes the legacy of redlining in the city and other discriminatory land-use practices that “produced inequitable patterns of development.”

Outside groups such as Habitat for Humanity Metro Maryland and the Maryland Sierra Club have come out to support Thrive Montgomery 2050. Montgomery County Councilmember Hans Riemer has also expressed his support for the plan.

Opponents, however, have voiced concerns, including the lack of community involvement and tax impact on residents. A petition by the Citizens Coordinating Committee on Friendship Heights states that per the plan,” current residential zoning will be changed to allow market-rate multi-family housing units (duplexes, triplexes, quadplexes) in single-family neighborhoods as a matter of right without any public input, resulting in potential gentrification of neighborhoods and displacement of residents countywide.” As of publication, this petition had amassed more than 3,500 online signatures.

Empowering People in Communities (EPIC) of MoCo is another group opposed to Thrive Montgomery 2050. EPIC of MoCo founder Kimblyn Persaud led a Nov. 4 protest outside the Montgomery County Planning Board building in Wheaton.

“We need all communities to be involved in this process since it is going to determine how we live for the next 30 years, and that just simply wasn’t done. This Thrive Montgomery 2050 is not a plan, it is an ideological wish-list,” Persaud said in an interview with Casey Aiken for “21 This Week” back in July. Persaud also expressed her views that “rushing” the plan through right after a pandemic is “shameful.”

Additionally, the Montgomery County GOP has voiced concerns, saying that “residents will have no say in what developers build in our neighborhoods” and that “Thrive Montgomery 2050 radically changes housing policy and will affect every part of this county, “BY Right”!” Far-right Breitbart News also published an article on the proposed plan, calling it a “War on Single Family Home Neighborhoods.”

The council encourages everyone interested in testifying to closely review the draft plan. It will be released on Nov. 16 when the council will hold a briefing on the changes made to Thrive Montgomery 2050 by the Planning, Housing, and Economic Development (PHED) Committee.