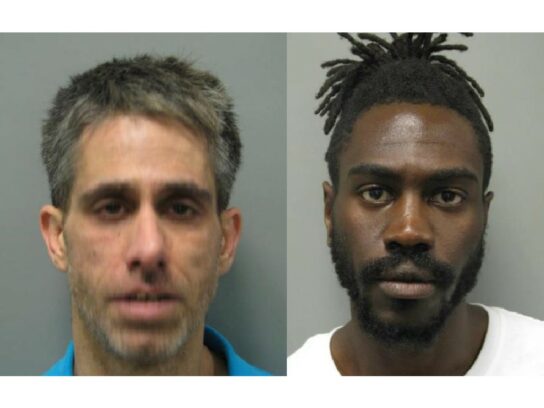 Montgomery County’s Department of Police arrested and charged two suspects in relation to two incidents of thefts from vehicles in Silver Spring and Calverton.

The suspects have been identified as 45-year-old Angelo Theo of Green Ash Court in Beltsville and 27-year-old Staco Delson of East Indian Spring Drive in Silver Spring, according to police.

Police said that at about 1:19 a.m. on Wednesday, April 8, officers responded to a report of a suspect stealing property from vehicles on the 3400 block of Kilkenny Street in Calverton. Upon arrival, police saw the suspect looking for property inside a vehicle and the suspect fled after seeing the officers. Police were able to arrest the suspect on Castleleigh Road where they identified him as Theo, according to police.

Police said that Theo had multiple stolen items on him and had an open warrant for theft from Prince Georges County. Police have found the owners of many of the stolen items and are working to find the owners of the rest. Theo was charged with theft related offenses and is being held on $500 bond, according to police.

Shortly after that incident at about 2:36 a.m. the same morning officers responded to a report of another suspect stealing property from vehicles on the 9300 block of Ocala Street in Silver Spring, according to police. Upon arrival, officers saw Delson inside a vehicle looking for property and arrested him. Police said Delson had what officers believed was stolen property on him and are currently trying to find the owners of that property.

Delson also had an open warrant for burglary in Montgomery County. He was charged with theft related offenses and is being held on $3,000 bond, according to police.