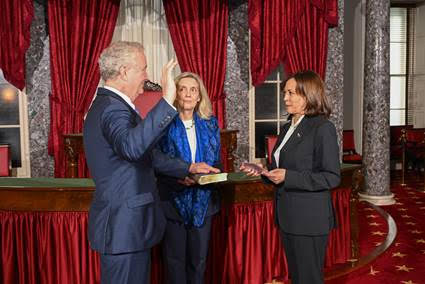 U.S. Sen. Chris Van Hollen (D-Md.) was sworn in for a second term Tuesday, vowing to “keep fighting to protect our democracy.”

With his wife, Katherine, by his side, Van Hollen was sworn in by Vice President Kamala Harris. He was accompanied by fellow Sen. Ben Cardin and former Sen. Barbara Mikulski.

“I am honored to serve the people of Maryland in the United States Senate and grateful for their vote of confidence to represent them for another six years. I know this is an immense responsibility, and I will continue working every day to uphold their trust,” he said.

He told an enthusiastic crowd of supporters in a reception following his swearing that he would strive “to build a more inclusive economy with greater shared prosperity. For Maryland, I’ll be working to invest federal resources in key initiatives across our entire state to support our schools, our workforce, our seniors and our communities, including removing the Highway to Nowhere so we can reunite divided neighborhoods in West Baltimore. And I’ll be fighting to build on the progress we’ve made to preserve and clean up the Chesapeake Bay by moving forward on our proposed Chesapeake National Recreation Area.”

Nationally, he promised to work for progress in equal rights, equal justice, a woman’s right to choose, gun safety and election reform. He also vowed to continue support for Ukraine and efforts to keep America safe.

Senate Majority Leader Chuck Schumer called Van Hollen and Cardin “great members of the team.” Van Hollen “is one of the great leaders of not only Maryland, but also of America.”

Lt. Governor-elect Aruna Miller told MyMCM, “Sen. Van Hollen has been a great leader for us nationally, and we are looking forward to working with him locally.”

Several senators stopped by Van Hollen’s reception to congratulate him. Sen. Chris Coons (D-Del.) called Van Hollen “an incredible colleague and partner.” He then thanked the people in the crowded Dirkson Senate Office building room for reelecting Van Hollen, calling him “a wonderful gift to the American people.”

Honored to be there today for the swearing-in of Senator Chris Van Hollen @ChrisVanHollen. We are proud of the way he's served the residents of Montgomery County since 1991, and we look forward to six more stellar years of his dedication to County residents and issues. pic.twitter.com/Vc0Jtja3TH