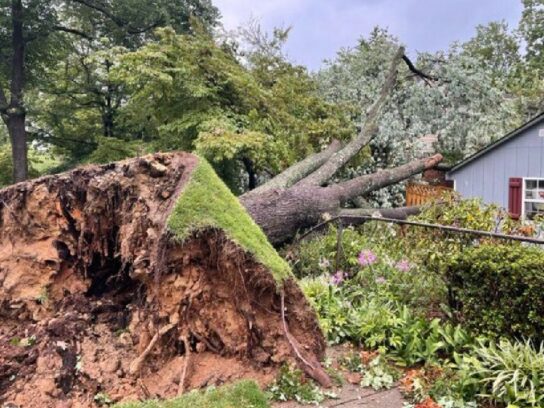 Montgomery County Fire and Rescue Services Spokesperson Pete Piringer tweeted photos of roads filled with debris and power lines, many taken near Wildwood Shopping Center on Old Georgetown Road in Bethesda. Several trees fell onto houses in that area, but no injuries were reported, he said, noting that “just about every street in the Wildwood area” had trees and wires strewn throughout.

The county’s Emergency Communication Center handled more that 100 calls for service between 3:30 p.m. and 5:30 p.m.. “About one call every minute. The daily average (24 hours) is about 325-350 calls for service. They were busy & handled it well,” tweeted Piringer.

About 10,000 customers lost power this evening as storms downed trees and power lines. Our crews are making progress and many customers are now back in service. We will continue to work around the clock until all service is restored. Stay safe this evening!

Wildwood neighborhood, lots of trees down, power out near Wildwood shopping Center https://t.co/72wiXR0RB7

Alta Vista Rd, off Old Georgetown Rd, tree rock wires down on top of vehicle, utility vehicle being used by work crew in area, no injuries, other nearby homes received some damage including one on Lundigan Ct https://t.co/BVFyqwPDGy pic.twitter.com/Q3cojbz7CR

ICYMI (8/11) @MontgomeryCoMD @mcfrs emergency communication center (ECC) handled >100 (dispatched) calls for service between 330 and 5:30 PM. About one call every minute. The daily average (24hrs) is about 325-350 calls for service. They were busy & handled it well pic.twitter.com/s19hEZguin