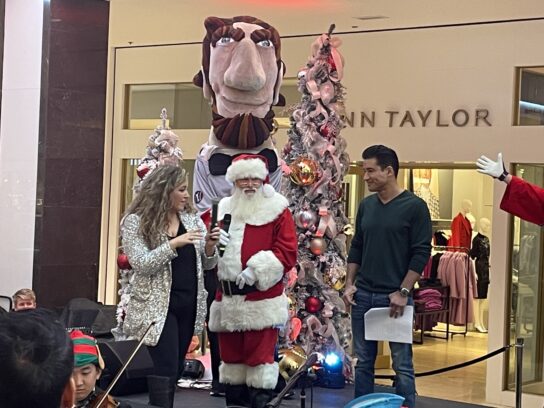 Westfield Montgomery mall was packed to the rafters for a holiday kickoff concert Sunday featuring The Maryland Youth Ballet, a string quartet, a tribute band, and the Washington Nationals Racing Presidents. The event was hosted by popular TV host and actor Mario Lopez. And oh yeah, Santa Claus showed up at the end of the concert to officially ring in the holiday season.

Lopez, host of NBC’s “Access Hollywood”, “Access Daily” and former star of “Saved by The Bell,” told MyMCM that he was happy to be hosting a holiday event in Montgomery County especially at a mall.

Lopez is starring in Steppin’ Into the Holiday which premiers Nov. 25 on Lifetime. The film features his real-life wife Courtney Lazza who plays his ex-wife.

The event celebrates the mall’s partnership with Children’s National Hospital Medical Center and Seacrest Studios within the hospital. Although the celebration was free, funds will directly benefit childhood patients. Westfield Montgomery will match donations made up to $10,000.