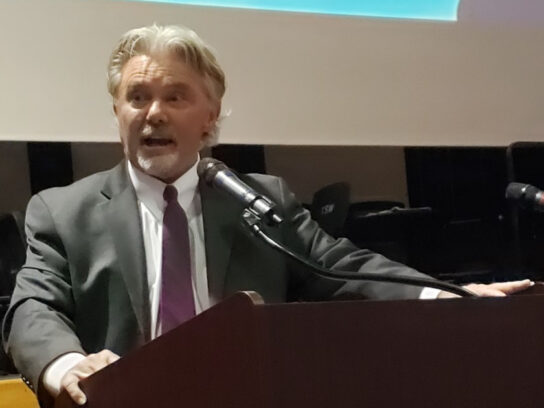 Struggling to hold back tears, Jennifter Pisarra described what it was like to check up on her son who was still in bed only to realize that he was no longer alive.

Michael Pisarra, who played football at Thomas Wootton High School and made friends easily, was preparing to enter his third year at Towson during the summer of 2020 when he took one non-prescribed Xanax pill that he didn’t know was laced with the deadly fentanyl.

“He took just one pill and died,” she told Wootton High School seniors Thursday afternoon, many of whom raised their hands when asked if they knew someone who had overdosed or died from and an overdose.

“My goal today is to ask you – to beg you – not to take that chance,” she told the students.

“That one decision changed all our lives,” said Michael’s father, Geoffrey.

Senior Shelby Cantor knew Michael and they shared mutual friends. Being told not to take drugs and watching videos about what drugs will do to you never had the impact that listening to his parents during the assembly had, she said. “Hearing from the parents of a classmate really makes a difference.”

Senior Dylan Safai also was moved. “I don’t want to put my parents through that,” he said when the assembly ended. While Safai said he isn’t likely to take drugs, “This definitely squashed any thoughts of it.”

State’s Attorney for Montgomery County John McCarthy created the Speak Up. Call 9-1-1. Save a Life program to spread the word about how deadly one decision could be. He also explained Maryland’s Good Samaritan Law, which protects anyone assisting in an emergency overdose situation from being arrested or prosecuted.

McCarthy stressed that he would much rather see someone be a friend and help save a life than send someone to prison.

Drugs laced with fentanyl “are in every single neighborhood. No one is immune,” McCarthy told the students. “You don’t always know what you are getting,” he said, noting that the deadly fentanyl can be laced in any pill and even marijuana flower buds.

“You are the future leaders of our country, and we need you, because  young people are dying at an alarming rate,” said attorney Steve Chaiken, who often speaks out against drug use. He noted that just the previous day, two teenagers from Prince William County, Va. overdosed.

He called fentanyl “the invisible killer. You cannot see it.”

Jessica Jeffrey, who described herself as a person in long-term recovery who is lucky to be alive, urged the students to pause and ask themselves, ‘Is it worth it?’ before taking any drugs not specifically prescribed for them.

Thank you, Geoff and Jennifer for sharing Michael’s story and helping to spread awareness about the dangers of fentanyl and accidental overdose. #SpeakUpSaveALife https://t.co/xopKEV1uMC