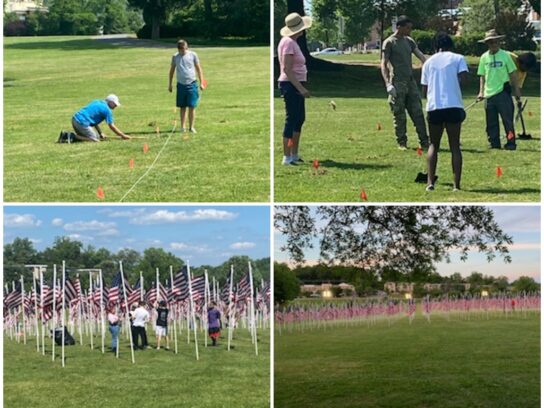 For the seventh year in row, hundreds of American flags will be on display at Gaithersburg’s Bohrer Park during Memorial Day. This year, the flags are being placed not just in memory of those who died fighting for this country, but also front line heroes as well.

This Memorial Day weekend, 750 eight-foot tall American flags will be mounted in the park in a Memorial Day event organized and presented by the Rotary Club of Montgomery Village and the Gaithersburg Rotary Club. The City of Gaithersburg also is a sponsor of Flags for Our Heroes. United Rentals donated the lights that will enable the flags to be seen at night.

“We are  happy to be part of this community event that will feature 750 American flags honoring members of the military, police, firefighters, teachers, coaches, mentors and community leaders at Bohrer Park at Summit Hall Farm.” wrote Gaithersburg Mayor Jud Ashman. 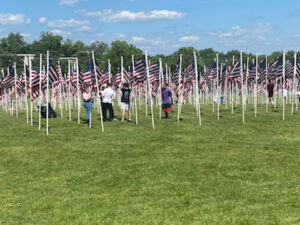 The virtual opening ceremony will be held Saturday at 11 a.m. at Bohrer Park, which is next to Gaithersburg High School at 512 S. Frederick Ave. A virtual closing ceremony is set for Memorial Day at 4 p.m. and will include removal of the flags. There also will be a flag retirement ceremony May 30 at 4 p.m. Anyone with flags they wish to retire should bring them to Bohrer Park and give them to the scouts, who will conduct the ceremony.

Work began May 26 to prepare the ground and set up the flags. “Literally, between Wednesday and Friday there probably were no less than 50-60 people in the field,” said Stu Rutchik, who has been a rotary member for 35 years. The assistants ranged in age from teenagers from scout troops and Junior ROTC programs to older rotarians, he said.

“It’s really a picture of people coming together. There is a diversity on the field. We are together as Americans,” he said.

It cost $25 to sponsor a flag in someone one’s memory. Each flag will display an honoree medallion with the name of a hero. After Memorial Day weekend, the medallions will be given to those who purchased them.