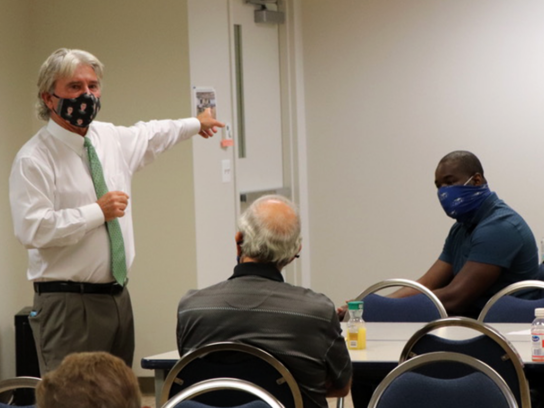 In Montgomery County, between 8,000 to 9,000 children do not attend school on a regular basis.

State’s Attorney John McCarthy suspects that this number has increased significantly because of the inequities exacerbated by the pandemic, like food insecurity, the digital divide, lack of childcare, and much more. On Tuesday, McCarthy visited Rockville to speak to volunteers training for the Truancy Prevention Program.

“I’m terribly afraid that some kids have fallen further behind academically because of the way they had to learn last year. There might be greater frustrations. We’ve got to reengage them, get them early, so they can come back and be successful in the classroom,” he said.

The State’s Attorney’s launched the program in 2010 as an early intervention program with the mission of discovering the root causes of truancy for students and assisting families so that making sure their children attend school is prioritized. Eleven years later, the program has now expanded to 18 MCPS middle schools and McCarthy has plans to bring it to all 36 of MCPS’ middle schools.

McCarthy said that MCPS identifies students at high risk of truancy and the volunteers are tasked with going to the school and meeting with the students. According to McCarthy, about 90% of the students in the program are Black and Latino. Volunteers have a variety of career experience and some, like Miguel Angel Oliveros Uceda speak Spanish, to help address possible language barriers.

Oliveros Uceda told MyMCM he’s volunteered for the program for five years and has found it rewarding to help students and families understand the possibilities that come from an education.

Successful completion of the program means that a student has reduced truancy in their classroom attendance by at least 60%. In 2020, 101 middle school students successfully completed the program and volunteers held a celebration for the students.

Oliveros Uceda said that at one of the completion ceremonies, a student, who was initially reluctant about the program, successfully completed it and cited Oliveros Uceda as helping him understand how education could help him reach his full potential.

“One single meaningful adult in a learning environment can change a child’s life,” McCarthy said. “The [volunteers] in this program are becoming that meaningful adult, someone that cares if you show up.”