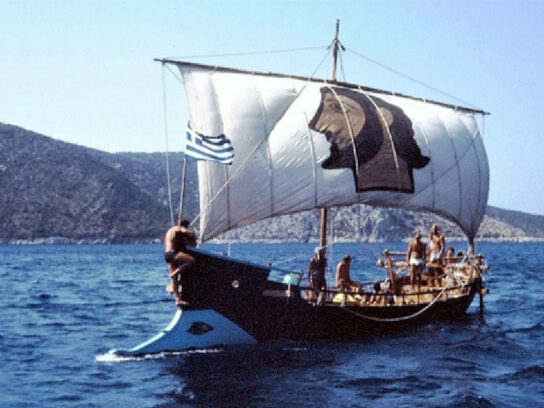 As an economist I was trained to make gargantuan assumptions and then reason from them – reality be damned! So let’s make some:

First, in 2022 Covid will be whipped, and world travel will explode.

Second, you are fascinated (like I am) by one of the greatest travel adventures of all time: Homer’s Odyssey, the story of Ulysses’ adventures as he tries for a decade or more to get home to Ithaca on the west coast of Greece, from Troy at the mouth of the Dardanelles in Turkey.

Third, you want to go to some or all of the sites that Ulysses visited.

With this idea in mind, your travel planning should be pretty easy. The Internet has masses of information on the topic. The wildest theories are that Ulysses sailed to the Black Sea, Spain, Ireland, Norway, the Indian Ocean, or even Argentina!

But most scholarly and popular sources agree that he traveled through the central Mediterranean. His major stops are asserted to be Tunisia (the Land of the Lotus Eaters), Gozo island off Malta (home of Calypso, who forced Ulysses to be her lover for seven years), the east coast of Sicily (lair of the one-eyed monster Cyclops and of the round harbor of the Laestrygonians, who destroyed eleven of Ulysses’ fleet of twelve ships), the Straits of Messina between Sicily and Italy (the location of Scylla the six-headed monster and Charybdis, a deadly whirlpool), Capri island near Naples, Italy (where the Sirens lurked), and Monte Circeo (on the coast near Rome) where Circe the “lustrous immortal nymph” seduced Ulysses and turned his men into pigs.

Sounds like a great trip. With great food—just try to avoid becoming a pig!

But there is a snag. Tim Severin, one of the greatest adventurers of all time, had a very different theory. His views deserve respect, since he built a reasonably accurate 54-foot replica of a Greek 20-oar sailing vessel, and re-created both the voyage of Ulysses and the voyage of Jason and the Argonauts across the Aegean and Black Seas to Georgia.

Severin believed that most of the Odyssey is actually centered around the coast of Greece. He had common-sense reasons for this notion: First, why would Ulysses sail hundreds of miles to the west, past his home, when all he wanted was to get back to his wife, son and dog? Second, his actual journey was not ten to nineteen years long – when you add up the actual sailing time described, it is only about four months, likely not enough time to get to get to Italy and back, let alone Argentina! Third, the vessels of the time could only sail downwind, or up to about 75 degrees on a close reach off the wind, so they had to wait, sometimes for long periods, for favorable breezes. Fourth, the Greeks used “coastal navigation”—they almost always sailed close to the coast, and pulled their vessels up on shore each night. A voyage to Italy would require much more advanced navigation.

Fifth and most important, in sailing and rowing his vessel around Greece towards Ithaca, Severin claimed that he found sites that match well with descriptions in the Odyssey. These include the original narrow strait between Levkas (Levkada, Lefkos) Island on the west coast of Greece and the mainland, which Severin asserted is much more threatening to a small craft than the Straits of Messina. He also found that a nearby cave overlooking the strait matched the cave of the monster Scylla, and that dangerous Charybdis-style whirlpools previously formed in the strait.

Severin noted that Circe told Ulysses that the beach of the Sirens was where two routes to Ithaca diverged, and said that the north tip of Levkas forces sailors to go through the strait or around the island to the west. He found a cave on the south coast of Crete that perfectly matches the cave of the Cyclops, with a large boulder that could be rolled by a monster to block the entrance. And he spotted a tiny circular harbor near the southern tip of Greece, which resembles the harbor of the murderous Laestrygonians.

So, on your big trip, will you be eating mostly Greek food, or Italian? I vote Greek, and I think that someday I can prove that Severin was right…