Families with young children passed through a ring of rainbow colors as they entered Drag Queen Story Hour Saturday morning at Brookside Gardens in Wheaton.

About 75 people, many waving rainbow flags, stood at all six entrances at the open air event to ensure that the children felt safe and enjoyed the activity. About two months ago, protestors shouted and disrupted a similar event in Downtown Silver Spring. Last month, the activists created a safe space at Kensington Library for the story hour.

A few protestors approached the event but when greeted by the activists and asked why they were there, they turned away and left.

Bee, a former Gaithersburg resident, saw what happened at a previous event and wanted to help ensure that no child was scared or harassed.

Rifka Handelman of Silver Spring showed up to enable the children to enjoy themselves. “It’s really fun and awesome,” Handelman said. Her mother, Kate Epstein, also joined the welcoming line, declaring, “I love watching the kids go by.”

Kristin Mink, who recently won the Democratic primary for council in the District 5, declared, “We love that there is diversity here. We want to celebrate diversity and support diversity.”

Mink wore a tutu and mingled with both children and supporters. She helped organize the community to show that the LGBTQ+ community is welcome and supported in Montgomery County, she explained. She called the greeters the Parasol Patrol DMV.

While standing in the welcoming line, Erin Hurst of Garrett Park wished this had happened years ago. Hurst grew up with lots of questions about LGBTQ+ issues but no one to ask. “I had to figure that out on the Internet.”

We covered all 6 entrances to ensure the planned protests did not occur, and families could enjoy Drag Queen Story Hour with @dmandamartini 🌈❤️ pic.twitter.com/NkRFA3Nk8H 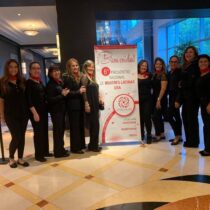