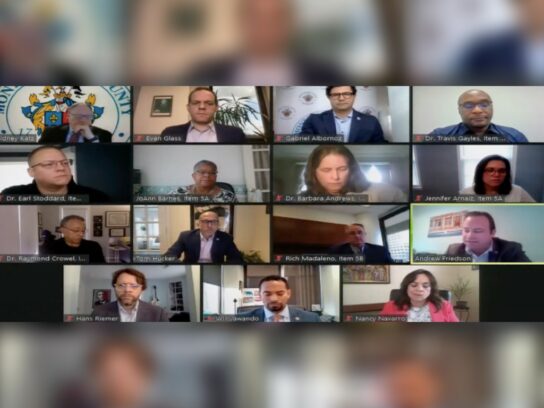 In a letter, County Executive Marc Elrich requested that Salmon let the county maintain the teacher-child ratio in classrooms with three and four-year-olds, at 1:14 instead of changing it to 1:10, as required by the state by the end of November. On Oct. 1, Gov. Larry Hogan and Salmon held a press conference to announce that childcare facilities can return to their normal ratios. For early childcare centers with three and four-year-olds, the state standard is up to 20 children with a ratio of one teacher to 10 students.

Montgomery County announced on Oct. 6 that childcare centers would stay in Phase 2 of COVID-19 reopening. The county’s capacity limit is 15 for early childcare facilities.

At a council meeting Tuesday, County Health Officer Dr. Travis Gayles said if the ratio tightens, the number of students who can be in the classroom decreases due to that limit. He noted that jurisdictions are allowed some authority to make their own reopening decisions, but Elrich’s waiver request was denied Friday. He will try again, Gayles said.

Maryland State Superintendent Dr. Karen Salmon rejected a request from @MontCoExec Marc Elrich that asked to maintain the teacher-child ratio in early childcare facilities at 1:14 instead of changing it to 1:10 as now required by the state. @mymcmedia https://t.co/K0R1UQpnej

“As a result, I know that the county executive is working on a letter in response to that, again to request consideration for that waiver.” He said the request is based on the recent increase in COVID-19 cases. Since the waiver was denied, cases have continued increasing, he said.

“The recommendation to stay at Phase 2 was informed by high levels of community transmission, and when that determination was made, the numbers have gotten even more significantly worse,” Gayles said.

Councilmembers were very concerned about the waiver rejection. Councilmember Andrew Friedson said this situation proves that relationships do matter.

“This is one of the challenging circumstances that we have found a clearly deteriorated relationship between the county executive and the governor and the serious consequences that that has on families and on our residents,” Friedson said.

Councilmember Friedson said relationships matter, and the one between Elrich and Gov. Hogan isn't good.

He said it's having consequences on residents, like this rejection. https://t.co/9gaNrIg9Tr

Councilmember Gabe Albornoz said this keeps happening with Hogan’s administration, and that he is not surprised by the request denial.

“Our relationship with the governor’s office feels like it’s regressed since the beginning of the pandemic, and communication has been an ongoing problem as we know,” Albornoz said. He said he is not confident a second letter will change anything.

Councilmember Tom Hucker had strong feelings about Hogan’s engagement with local leaders during the pandemic.

“I can’t think of any other governor in 20 years who did not have routine conversations with the county executives of the largest jurisdictions in Maryland, particularly so during every natural disaster, and every public health emergency, and every recession,” Hucker said. He said Hogan’s communication with county executives is bizarre.

“I’ve never seen any governor be so disengaged from local leaders during those types of emergencies. For Governor Hogan to conduct only conference calls with the executives of the largest jurisdictions and to do so through staff, not personally, is just absolutely bizarre and is not serving us well,” Hucker said. Because Hogan “likes to show that he’s in charge,” Hucker said he should have weekly briefings with his cabinet and the county executives of Maryland’s largest jurisdictions.

JoAnn Barnes, chief of children, youth and family services, said if the waiver doesn’t get approved, county leaders will “have to put our heads together” to figure out other remedies. She said it’s confusing that the state gives local jurisdictions some authority to make public health decisions based on local circumstances, but then denies any help requested in order to make those safety decisions.

“It does put us in a bit of a quandary,” Barnes said.

Early Childhood Services Administrator Dr. Barbara Andrews agreed. She said in Phases 1 and 2, the teacher-child ratios were relaxed. Montgomery County is still in Phase 2 and is doing what it has been doing, but yet the state is requiring all jurisdictions go back to normal ratios for childcare centers by the end of November, which her department doesn’t “completely understand.”

Councilmember Will Jawando called out Hogan for something the governor often criticizes: playing politics.

“I am furious that the state superintendent and Governor Hogan have played politics with something that we were already approved to do,” Jawando said.

“You [Barnes and Andrews] were very kind to say it doesn’t make sense, I’ll go further and say it’s just absolutely ridiculous.” He said the state is punitively punishing Montgomery County for something it was already doing.

Andrews said the next step is to apply pressure, and as far as she knows, Elrich plans to make his letter public.

The next step is to apply pressure, said Dr. Barbara Andrews with Early Childhood Services. She said Elrich intends to make his letter public.

Councilmember Albornoz doesn’t think a second letter will change anything.

“Let’s hope it does but I’m not confident that it will.”