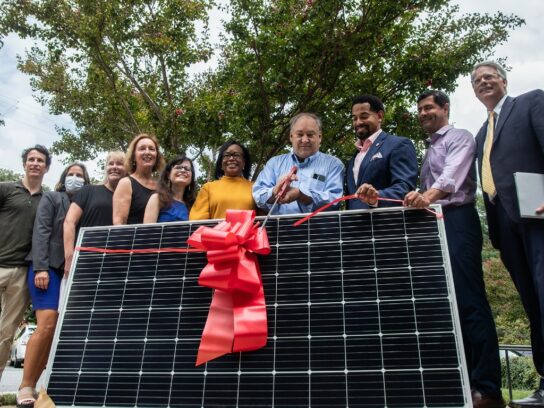 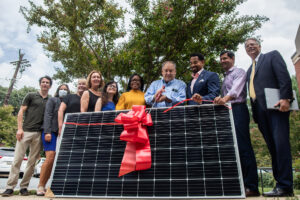 The 286 kilowatts of solar panel energy will be subscribed to county households in increments of about three kilowatts per household, Montgomery County Green Bank CEO Tom Deyo said. Those who are renting or cannot put solar panels on their homes can still subscribe and participate in the program. It will reduce greenhouse gas emissions by over 235 metric tons each year, or the equivalent of 51 cars taken off the road annually, Deyo said.

Low-and-Moderate-Income (LMI) participating households will receive free subscriptions, according to the county. 30% of the 91 subscriptions at the site will be given to lower-earning renter and owner households. The project is under construction and should be completed by September.

“Being able to do projects like this, where we can both be green and we can be equitable, is absolutely essential,” County Executive Marc Elrich said. He said the county needs to utilize potential electricity in order to reach climate goals. In June, he unveiled a Climate Action Plan to cut greenhouse gas emissions (GHG) by 100% by 2035 compared to 2005 levels and help mitigate climate change risks.

“We are headed into a flat-out disaster,” Elrich said Tuesday. He said Montgomery County must try to change the trajectory of climate change.

“Nobody [is] going to argue about whether this should go on a rooftop. It’s going on rooftops. We’ve got to make sure we build as much of this as we can.”

He hopes residents see the financial benefits of solar panels and become ambassadors for encouraging others to take advantage of the opportunity.

Residents can learn more about the solar installation during a Paddington Square Community Solar Information and Career Workshop at the complex Saturday at 10 a.m.