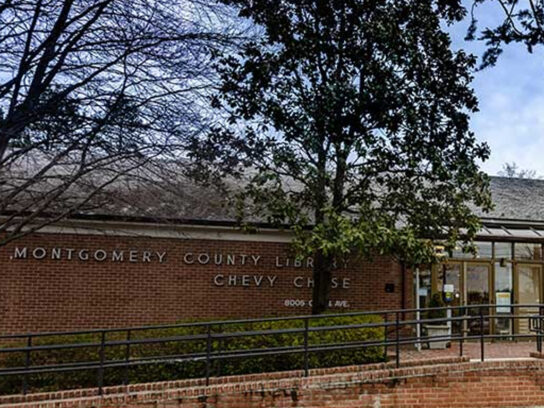 The Chevy Chase Library, built in 1965, needs major repairs and updates according to the Office of Planning and Development. The building underwent five major renovations between 1990 and 2009. Now the County wants to hear from the public to determine the future of the library.

The county poses two possible scenarios. The first would initiate a full-scale renovation of the existing 16,000-square-foot space. Renovations would include fire and waterproofing, roof repairs, replacement of dated mechanical systems, new water fixtures, and compliance with ADA and energy efficiency requirements.

Officials estimate the total cost of the recommended renovations at $3.7 million, according to a March 2021 Facility Assessment by Sheladia & Associates, Inc. Work on this project would take approximately two to three years, with an estimated start date at least five years from now.

A partnership between the County and a private developer offers another solution: a 20,000 square-foot, one-story high replacement library. In this scenario, the property would be designated as mixed-use. Developers would incorporate residential development into the building, which the county hopes would offset the costs of the new library. The timeline for this project would be similar to that of the renovation option.

Share your input on the future of the Chevy Chase Library! Two possible scenarios include renovation of the existing library or the construction of a new, larger library on site with residential development. Learn more ➡️ https://t.co/JvUAwK1TBC. @MCPL_Libraries pic.twitter.com/yQQpUBrG5e

Supporters of the renovation option worry that the proposed mixed use project would exacerbate traffic congestion on local roads. According to a compilation of community comments, some residents also wrote that a public-private partnership would not adequately address concerns from the community.

“The renovation needs for Chevy Chase Library are not so extensive that they justify giving developers even more land under the guise of a public-private partnership,” Gregory Koblentz wrote on Oct 1.

“The private partner will always prioritize profitability over public service. They will cut corners wherever possible,” added Jacqueline Coolidge on Oct. 14.

Supporters of the redevelopment option described the Chevy Chase Library as an “ideal location for higher density housing” with a focus on affordability.

“It’s clear a large number of people would love to live there,” Michael Dutka wrote on Oct. 27 . “Let’s not prevent them from doing so because it would be slightly annoying for the wealthy residents who live nearby.”

The County is accepting public comments through noon on Monday, Nov. 15. Interested community members can submit feedback by completing this form.