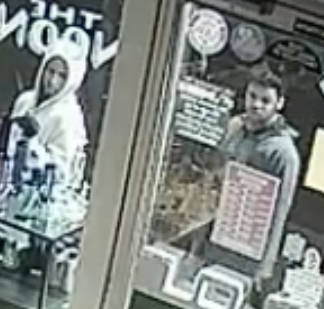 Detectives with the Montgomery County Police Department are investigating a burglary of a business in Silver Spring that happened in October.

On October 18 shortly before 2:00 a.m. dispatch got a call that the glass front door to the Noon Store located on the 7900 block of Georgia Avenue had been shattered.  Officers responded and discovered that the business had been burglarized.

After further investigation it was determined that two suspects broke the front glass door and within three minutes had exited the business with stolen items and then fled on foot.

Video surveillance and photographs of the two suspects have been released, and police are asking anyone with information regarding this incident to please contact investigators.

Investigators are asking anyone with information regarding the suspects to call the 3rd District Investigative Section at 240-773-6084. Those who wish to remain anonymous may call Crime Solvers of Montgomery County toll-free at 1-866-411-TIPS (8477). Crime Solvers will pay a cash reward of up to $10,000 for information provided to them that leads to an arrest and/or indictment for this crime.