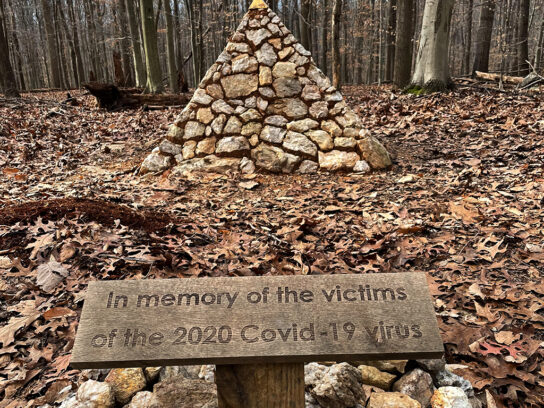 A Germantown man’s pyramid memorial to those who died from coronavirus started as a memorial to his brother, who passed away five years ago from lung cancer. Then he created a memorial to COVID-19 victims at Black Hill Regional Park in Boyds.

But it may have to come down now as he never requested a permit from the Montgomery Parks Department.

Christ Wikman, a self-described artist, musician and engineer, began gathering as many white quartz rocks as he could, with help from his wife.

Meanwhile, he continued his artwork, specially creating “unusual looking instruments” that he plays in his band, Free Space Energy. Wikman explained his instrument of choice is synthesizer, and he plays avant garde music. He also enjoys making videos and sculpting.

Due to the pandemic, he has had extra time on his hands so he spent about six weeks, arranging the quartz rocks into a memorial that now sits in a remote area at Black Hill Regional Park in Boyds.

Wikman said he started building it around Memorial Day of last year and finished it in June. He never asked permission from the parks department, but readily admitted he probably should have.

He recently was told by the park commission that he either had to remove the memorial or they would do it for him, because he never received a permit to build it.

Word got out in the neighborhood and many neighbors sent letters to the parks department, noting that they thought the memorial was very well done and they wanted it to remain. Now, Witman said, plans to remove his artwork currently are on hold.

Melissa Chotiner, media relations manager for the planning department, confirmed that. “We are evaluating our options regarding the unsanctioned memorial at Black Hill Regional Park. We are not currently insisting that it is removed,” she told MyMCM.