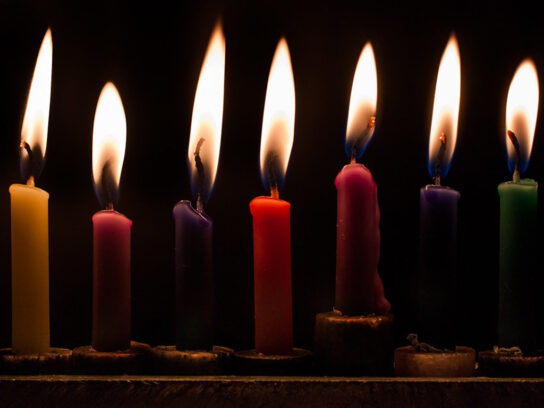 The Jewish holiday of Hanukkah began Thursday at sundown with the lighting of the first of eight candles. It continues for eight days, until  Dec. 18.

This Festival of Lights celebrates the victory by the Maccabees over the Syrian-Greek army so that the Jewish people could observe their own religion and not have to accept the Greek culture and beliefs. The Maccabees reclaimed the Holy Temple in Jerusalem and rededicated it. The word Hanukkah means dedication.

The holiday also celebrates the perceived miracle that enabled a snall amount of olive oil to last, thereby allowing the menorah to be lit all eight nights. To commemorate how long the oil lasted, Jews eat fried food during the holiday, including latkes, which are potato pancakes, and fried jelly donuts.

The dreidel is spun during the holiday. Each of its four sides sports a Hebrew letter -nun, gimmel, hey and shin, that form an acronym that means  “a great miracle happened there.”

Wishing those of you who celebrate a happy, healthy and safe Hanukkah! pic.twitter.com/HB2LnWYpQC