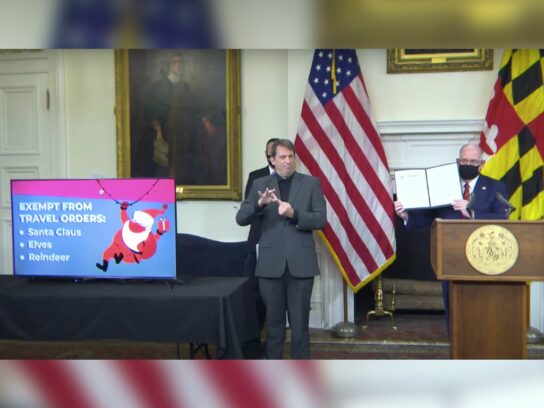 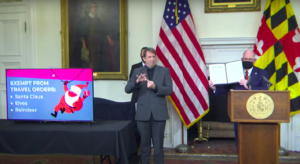 Gov. Larry Hogan has issued an emergency order that limits travel to essential reasons only.

Those who travel in and out of Maryland are now required to get a negative COVID-19 test result or self-quarantine for 10 days, Hogan said at a press conference Thursday. The restriction doesn’t affect people driving to and from states in the region.

“We’re talking about flying out of state or traveling to places that are outside of our region,” Hogan said. People travel between local borders everyday for work, Hogan said. He also said the state won’t be enforcing these travel and testing/quarantine requirements.

“We’re not going to be out there checking people or having law enforcement come after people for traveling,” he said. “We’re just going to rely on the good faith of the people that are going to listen to these orders because they’re critically important to keeping people alive.” The governor said the state will try to get people to cooperate as much as possible.

Hogan said the state won’t be checking people on this and won’t have law enforcement do that either.

“We’re just going to rely on the good faith of the people that are going to listen to these orders.” @mymcmedia https://t.co/l74oWshwsU

There is an exception to the travel order. In a “very special emergency order,” Hogan exempted Santa Claus, his elves and reindeer from any and all travel, testing and quarantine requirements. Hogan said according to Dr. Anthony Fauci, Santa is immune to COVID-19. He’s still going to wear his mask, though, Hogan said.

Hogan emphasized this exception only applies to non-human elves and the “one, true” Santa.

“It does not apply to any of his representatives or contractors, including without limitation, Mall Santas,” the emergency order reads.

"This Order only exempts the Real Santa. It does not apply to any of his representatives or contractors, including without limitation, Mall Santas." 🤣 @mymcmedia https://t.co/92RY0wzy2e

The governor said the state’s “theme” this season is Home for the Holidays and he urged Marylanders to stay home.

“You are safer at home for the holidays this year,” he said. Hogan lowered the gathering size limit from 25 people to 10, which is already the limit in Montgomery County. He announced that all state employees who are able to telework must do so, and beginning Monday, all in-person customer-facing operations at state facilities will be suspended for two weeks. Hogan encouraged businesses to institute telework policies if possible.

The governor announced an additional $180 million in immediate emergency economic relief to Marylanders: