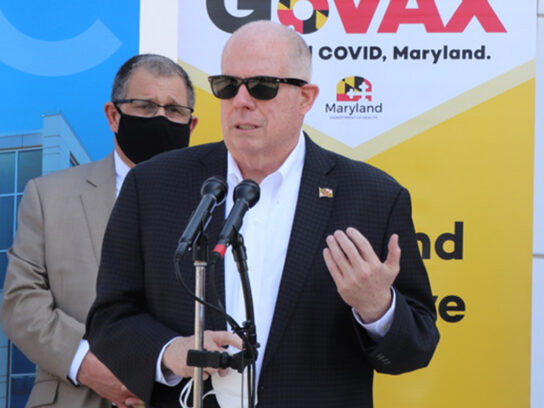 Gov. Larry Hogan was asked after touring the mass vaccination site at Montgomery College Germantown on April 7 if there are any plans to shift vaccine distribution to parts of the state that have more of a demand in terms of residents wanting the vaccine, rather than distributing based on per capita data to counties.

Hogan said the distribution is based on a combination of population and demand and he said Montgomery County, as the largest county in the state, gets the biggest share of vaccine doses.

“They also happen to be the biggest consumer of vaccines at all of our mass vax sites across the state, so not only do they have hundreds of places to go in Montgomery County but they’re also going other places to get the vaccine,” he said.

Hogan said the state’s equity task force also works to make sure that the vaccines are making their way into hard-hit communities.

“Our goal is really to vaccinate every Marylander that wants one in every single jurisdiction,” Hogan said.

Hogan was also asked by a reporter how long he expects that the Montgomery College mass vaccination site will remain open. The governor could not provide an answer because of the changing amount of vaccines that the state receives from the federal government, but he expects at some point soon the demand for vaccinations will slow.

“At some point in a relatively short period of time, we’re going to have more vaccines than we have people wanting them and then it becomes a much harder effort of really searching out people where they are. Some people that can’t get to a vaccination center we want to reach them in their homes or their doctor’s office or at their local pharmacy.”