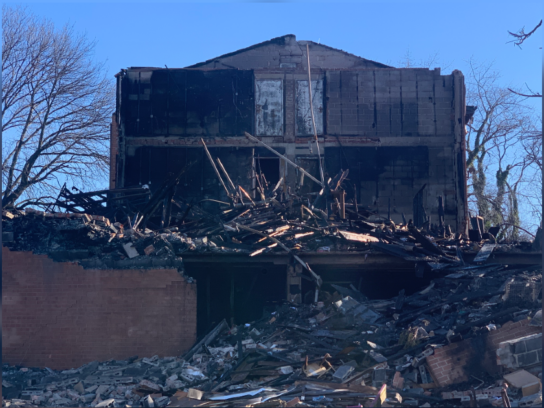 As the investigation continues into the cause of an explosion at Friendly Garden Apartments in Silver Spring, officials said they have found a cut gas pipe in the basement of the building.

Montgomery County Fire Chief Scott Goldstein said they are working to learn the source of ignition and are currently working on multiple theories. One of those theories is that a maintenance employee working inside the building could have possibly cut the gas pipe.

At a press conference with Sen. Chris Van Hollen in Silver Spring on Friday, County Executive Marc Elrich said that it was too early to know the cause of the explosion and that workers were clearing rubble from the basement to gather more information.

However, Elrich said, “It looks like a gas explosion. No one is going to say definitely.”  He added, “We are inclined to think that human error” was more likely the cause than “a failure of equipment.”

At a 3 p.m. media briefing Goldstein said “we do not have the ability to connect that it was a human error that caused the explosion. We have a cut gas pipe in the basement. We are still working theories.”

In the past nine years, there have been two calls for gas leaks reported at the apartment complex built in 1971—including one call in 2016 and another in 2017, Goldstein said

There have been 14 people reported to be injured from the explosion and fire. According to Goldstein, all people believed to be living in apartment building #2405 have been accounted for. However, officials are actively searching the rubble with K-9 dogs for people who might have been in the exterior of the building and not a known resident at the complex. The fire chief also said there have been several alerts from K-9 dogs at the front left corner of the apartment building.

“We hope that we are dealing with components, clothing, or other items that belong to occupants in this building that are giving us these alerts for the dogs,” Goldstein said. “And until we are down to the bare ground and all the debris is removed, we can’t rule that point out.”

On Friday MyMCM visited the apartment complex and spoke with displaced tenants. Many lost everything in the explosion.

If you would like to support the victims of the Silver Spring apartment explosion, you can visit MHPartners.Org to make a monetary donation. According to Mary Anderson, a county public information officer, more than $360,000 had had been donated to the dedicated fund as of Friday afternoon. Anderson estimates the donation amount with reach half a million by Monday.