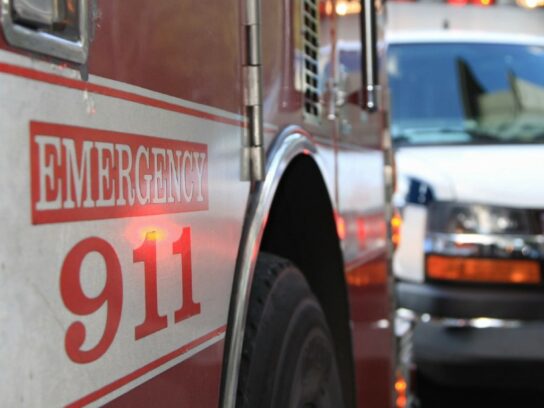 A vehicle collision in Kensington Tuesday afternoon left multiple people injured, with one individual later succumbing to her injuries, according to the Montgomery County Police Department.

Montgomery County Fire Rescue and 2nd District officers responded to a collision around 3:50 p.m. Tuesday at the intersection of northbound Connecticut Avenue and Franklin Street. The MCPD Collision Reconstruction Unit is conducting an investigation regarding the incident.

The preliminary investigation revealed a black 2007 Toyota 4Runner traveling eastbound on Franklin Street was struck by another vehicle while crossing Connecticut Avenue, causing the car to roll over. The second vehicle, a blue 2006 Toyota Tacoma, was traveling northbound Connecticut Avenue. The driver and passenger of the 4Runner were pulled from the turned over vehicle by Montgomery County Fire Rescue and transported to a nearby hospital with serious injuries. The Tacoma’s driver was transported to a local hospital with non-life threatening injuries.

The following day (Nov. 17), the passenger of the 4Runner died from injuries sustained in the collision. The name of the deceased 72-year-old woman will be released following the family being notified.

The Collision Reconstruction Unit asks anyone with information regarding this collision contact detectives at 240-773-6620.

Update: The victim has been identified as 72-year-old Michaele Anne Bedford of Kensington.