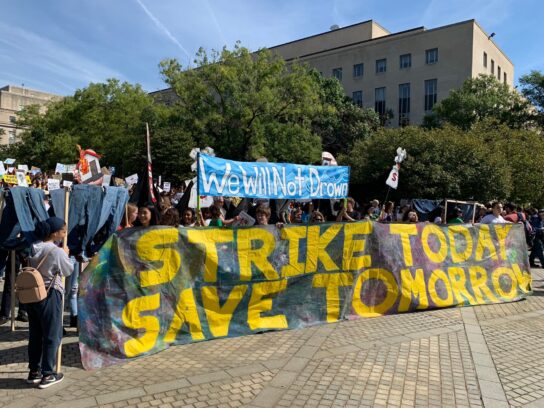 Clarksburg on the bus to the #ClimateStrike… Public transit ridership is the first step! 🚨 pic.twitter.com/t7iaFum4wy

County Executive Marc Elrich sent a letter to Superintendent Jack Smith and the school board on Tuesday, asking to give students at the rally an excused absence instead of unexcused. Elrich said students leaving school for the rally should be excused if they meet certain criteria, like getting permission from parents, showing evidence that they went to the rally and writing a summary afterwards.

“However you decide to address it, I do believe there’s a way to allow it while addressing security and other concerns,” he wrote. 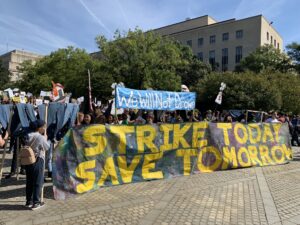 In a response Thursday, MCPS and the Board of Education said they’re proud of students speaking up, but they should do so at school if it’s during school hours. MCPS said leaving school disrupts class time and is a safety risk.

“As outlined in MCPS regulation, students who leave school property without permission or walk out of class outside of the designated time, it will be considered an unexcused absence,” the statement said.

MoCo Students on Climate, a student climate advocacy group, has an online petition with specific requests toward MCPS and the school board.

The group asks that MCPS and board members not punish students who participate in climate strikes from Sept. 20-27, make Sept. 20 a no-test day, let students share information about climate strikes in school, and meet with students from Sept. 20-27 to talk about climate change in the County. MoCo Students on Climate also want MCPS to listen to former Student Member of the Board Ananya Tadikonda’s goal for students to be allowed five excused absences for civic engagement.

In January, the school board proposed giving students three excused absences for civic engagement, but it was stalled and is not scheduled for more discussion.

MoCo Students For Change, a student social justice organization, organized a kick-off rally before the main climate strike. Students met at the Silver Spring Metro Station at 9 a.m. with a banner before heading to Washington, D.C.

Our planet. Our future. ✊ 🌎#ClimateStrike pic.twitter.com/OFkYt3Gq8D

The United Nations (UN) Climate Action Summit is Sept. 23 in New York City. Leaders will bring “concrete, realistic plans to enhance their nationally determined contributions by 2020, in line with reducing greenhouse gas emissions by 45 per cent over the next decade, and to net zero emissions by 2050,” according to the UN webpage for the summit.

Baltimore City Public Schools took a more empowering approach toward students. CEO of BCPS Sonja Santelises released a statement Friday and said principals should make time and space for students to talk about climate change at school. She said school police and city police would make sure students who leave for the strike are safe and not interfering with traffic.

“I support the determination of our students to express their voice, and I encourage them to do so in a manner that is safe and responsible,” the statement concluded. 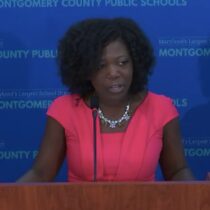 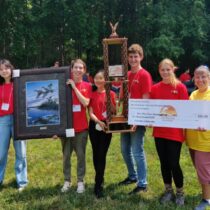