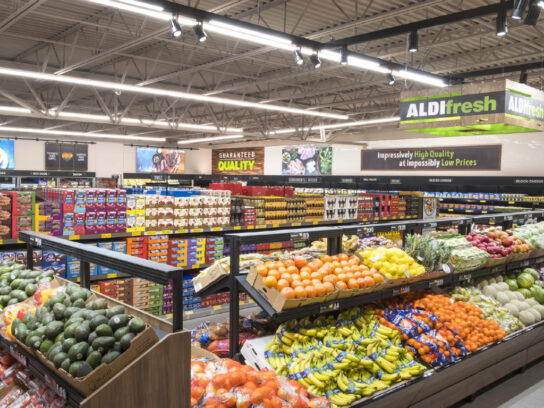 The opening of ALDI at the Village Center in Montgomery Village could be happening sooner rather than later. 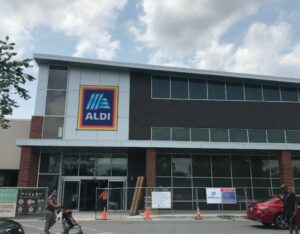 A post from the Google Maps listing for the store back in September initially said it would open on Oct. 22, 2020, according to a screenshot from The Moco Show. However, that post has since been removed, indicating that the grocery store may not be opening on that date.

Despite the uncertainty, local leaders seem optimistic and excited for the new addition to their nearby shopping center.

MyMCMedia spoke with Mike Conroy, the Assistant Executive Vice President of the Montgomery Village Foundation. He said that while the Foundation doesn’t have any direct influence over the businesses that come to Montgomery Village and the Village Center, they definitely work with businesses when they do. “Having the options right here in the village and keeping those folks shopping right [here] works well for the residents, it works well for those businesses, and it also opens the possibility for other businesses to come to those center because of increased foot traffic and presence.”

Their not going to have to travel as far if they want something different. – Mike Conroy

The addition of the ALDI grocery store is one of many changes following the approval of the Montgomery Village Master Plan back in 2016. With that approval, Conroy said that the plan opened up reinvestment in the community by outside sources like ALDI. But he says ALDI isn’t the only investment coming to Montgomery Village.

Directly across the street from ALDI will be where Lidl, a competing grocery chain, is building its own grocery store. As of the Summer of 2020, Lidl said they projected to have their store open by Spring of 2021, according to a press release from the Montgomery Village Foundation.

Conroy also said developers purchased the former Montgomery Village Golf Club and are developing it with new homes and community amenities, adding to changes in and around the area. The Golf Club was closed in late 2014 after the Montgomery Village Foundation approved preliminary development plans for housing on the 147-acre course. At the time, Russell Hines, President of Monument Reality which owned the course, said they would be closing the course due to falling membership and the announcement of the now completed master plan.

Conroy also told MyMCMedia that he thinks the Foundation has succeeded in bringing new investment to Montgomery Village, as seen by the changes already in progress. He said the Foundation wants to help “bring in as much opportunity and stuff that our residents want.”

Conroy is also optimistic about the addition of residential lots behind the Village Center, and what this will bring to residents and subsequently the businesses at the Village Center. “By Atlantic Reality Company turning this into a mixed use center, adding that residential component to it should, in theory, open the opportunity for more desirable business and things that can keep the Center opened longer and keep it more self-sustaining.”

The opening of ALDI, however, does not mean other nearby grocery stores will be closing. Conroy says residents still have the Giant off Rothbury Drive and the Safeway grocery store off Goshen Road as options. “So, I don’t think we are really losing anything in the overall scheme [of things],” Conroy said, adding that the relative number of stores is rising to where things had previously been.

Conroy also thinks the opening of ALDI will be a good thing for residents because “they’re not going to have to travel as far if they want something different.”

MyMCMedia reached out to ALDI for comment on the opening of the Montgomery Village location. They responded, saying “there are many factors involved when we open a location, so we can’t always confirm opening dates in advance.”

ALDI says you can check for upcoming Grand Openings and Remodels by visiting www.aldi.us.