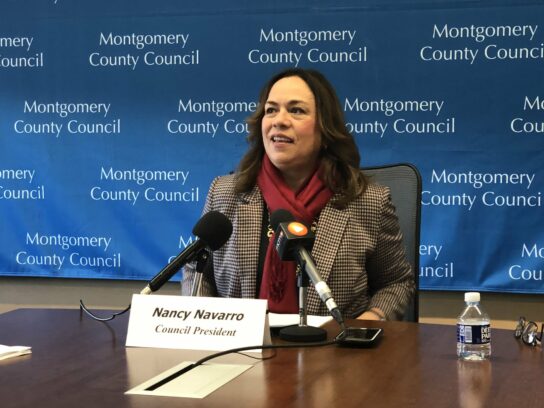 With her term coming to an end, Montgomery County Council President Nancy Navarro reflected Monday on the past year.

“It has been an amazing year; it’s been a unique year of course with all the transitions of a new administration after 12 years… as well as pretty much a new council…” said Navarro.

“The council of governments has put forth revised housing goals, and so we adopted that as well and that’s really important because housing affordability is very much linked to economic development here in our county,” said Navarro.

On December 3, new council officers will be elected. As vice president, current County Councilmember Katz is expected to be the next Council President.

Overall, Navarro says it’s an honor to look back at a year that has been so productive.

“I can say that I’m really proud because in my opinion it was a very productive year under a lot of trying circumstances with all the changes, but this council was able to produce a lot of really important not only pieces of legislation but also launch important initiatives so for that I am really grateful and really proud of the work,” added Navarro.

Navarro also discussed [Bill 36-19] which she introduced Tuesday to establish a County Office of Grants Management which is intended to help build community partnerships, provide more transparency for the County’s grants process and capitalize on additional private, state and federal grant funding.

#HappeningNow: Council President @nancy_navarro is meeting with the media at the Council Office Building talking about how her year as President has been and the unity of the entire Council. pic.twitter.com/j0PI1pAQm1